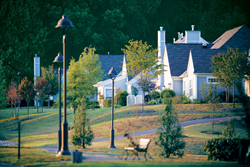 ...The Collington and Kendal organizations have been extremely successful affiliation partners and the favorable bond pricing reflects the strong management teams in both organizations. We are pleased to have aided Collington...

Collington Episcopal Life Care Community, Inc. (Collington) is a nonstock corporation organized under the laws of the State of Maryland for not-for-profit purposes. Collington is located in Mitchellville, Maryland, in Prince George’s County. In 1982, Collington began to develop, construct and operate a continuing care retirement community. In 1988, Collington received its certification from the Maryland Department of Aging to provide services according to the provisions of its Residence and Care Agreement. Collington currently consists of 330 independent living units (145 apartments, 157 cottages & 28 villas), 65 assisted living units (includes 36 memory care) and 44 skilled nursing beds.

In 2011, Collington affiliated with The Kendal Corporation, a Pennsylvania non-profit organization. Under an Affiliation Agreement, The Kendal Corporation provides Collington with advice, expertise and support in the areas of human resources, finance, food service, information systems, public relations and marketing, education and training, fund raising and legal assistance.

Collington issued its Series 2017 Bonds to (i) currently refund bonds previously issued by Prince George’s County, Maryland, (ii) repay a construction loan from Santander Bank, N.A., (iii) finance the costs of certain capital improvements to the facility, (iv) fund a debt service reserve fund, and (v) pay costs of issuance related to the financing. The Series 2017 Bonds are non-rated bonds and were structured as serial and term bonds with a 10-year call at par on April 1, 2027.

“Collington, A Kendal Affiliate, serves as one of the only not-for-profit CCRCs in Prince George’s County,” according to Amy Castleberry, Director, Ziegler Investment Banking. “Its 125-acre rolling, wooded campus feels private and serene, yet close to important amenities. The Collington and Kendal organizations have been extremely successful affiliation partners and the favorable bond pricing reflects the strong management teams in both organizations. We are pleased to have aided Collington in moving from variable-rate bank financing to a longer-term, fixed-rate capital structure.”

“This financing is the culmination of several years of hard work and determination by our board, residents and staff to improve all aspects of Collington,” according to Collington Executive Director Marvell Adams. “It represents our greatly strengthened financial position and provides a foundation for even stronger performance into the future. Next year, Collington will celebrate 30 years of service to older adults and this financing will help ensure another 30 years and then some!”

According to Collington CFO Justin Reaves, “Collington’s position in the market and financial stability has significantly improved over the last few years. The community wanted to leverage this progress to achieve a couple of key goals including increased financial flexibility with long-term fixed debt service. Ziegler captured the Collington story and helped the leadership team properly communicate this to potential investors, which allowed for an exceptionally successful transaction. We were able to accomplish our goals, benefiting current and future residents. Collington’s partnership with Ziegler has been rich and rewarding, exceeding expectations on every level.”

Certain comments in this news release represent forward-looking statements made pursuant to the provisions of the Private Securities Litigation Reform Act of 1995. This client’s experience may not be representative of the experience of other clients, nor is it indicative of future performance or success. The forward-looking statements are subject to a number of risks and uncertainties, in particular, the overall financial health of the securities industry, the strength of the healthcare sector of the U.S. economy and the municipal securities marketplace, the ability of the Company to underwrite and distribute securities, the market value of mutual fund portfolios and separate account portfolios advised by the Company, the volume of sales by its retail brokers, the outcome of pending litigation, and the ability to attract and retain qualified employees.