Author Elaine Reeves’s Newly Released “Determining Factor” is the Story of How God Uses Jake Walker to Break the Government Oppression of a Dystopian Future.

“Determining Factor” from Christian Faith Publishing author Elaine Reeves is set in a future where government controls all aspects of life. When Jake Walker deviates from the government mandated norms, his faith in God will save him and deliver the world from the evils of mankind’s most oppressive government. 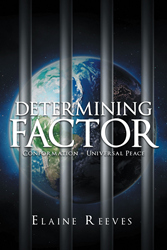 “...all their provision, protection, and peacekeeping came with a heavy price.” --Elaine Reeves

Published by Christian Faith Publishing, Elaine Reeves’ new book unleashes the power of God against the most oppressive government in history.

Decades of bad decisions and general passivity brought the world to the brink of annihilation. Feeling hopeless, mankind grasped at the lifeline that was extended to them. A despotic government took away the burden of free will and replaced it with something more manageable. Decades later, the government now controls almost every aspect of daily life. There are very strict rules about how a citizen should behave. One mistake, one deviation from the norm, it is the end of the line.

Jake Walker will experience firsthand the horrors that the government inflicts upon those who deviate from the expectation of the ruling class. Because of his alleged “crimes,” he has been called to stand in judgment before the Committee. It is something every man, woman, and child fears. Through faith, Jake finds that it really is not the end. God has a plan for his life. What the world had intended for his destruction, God will use for good.

For additional information or inquiries about “Determining Factor”, contact the Christian Faith Publishing media department at 866-554-0919.