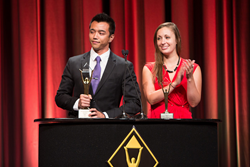 Grand Stevie Award winners from the 2016 ceremony in NYC

CallidusCloud, the Dublin, CA software developer has received the Grand Stevie for Organization of the Year for the second year in a row, with a record 111.5 points.

The Stevie® Awards today announced the Grand Stevie Award winners in The 15th Annual American Business Awards. Winners will be presented their Grand Stevie trophies at the ABA gala event on June 20 in New York.

The Grand Stevie Award trophies are best-of-competition prizes that are awarded to the organizations that submit the best body of nominations to the competition, in their own name or in the names of one or more clients. Winners are determined by a points system based on the total number of awards won in the ABAs, with a Gold Stevie win counting for three points, a Silver Stevie for two points, and a Bronze Stevie counting for one-and-a-half. Gold, Silver and Bronze Stevie winners in the 2017 ABAs were announced on May 2.

CallidusCloud, the Dublin, CA software developer has received the Grand Stevie for Organization of the Year for the second year in a row, with a record 111.5 points. Stevie-winning organizations are accorded three points for each Gold Stevie win, two points per Silver Stevie win, and one-and-a-half points for each Bronze Stevie win.

Other Grand Stevie winners include:

Grand Stevies will also be presented to the 10 other organizations with the most points in the 2017 competition. They are:

All organizations operating in the U.S.A. – large and small, public and private, for-profit and non-profit - are eligible to submit nominations to the ABAs in a wide range of categories, honoring achievement in every aspect of work life, from customer service and management to public relations and product development. More than 3,600 nominations were reviewed in the judging process this year by more than 190 professionals, whose average scores determined the winners. The presentations will be broadcast live via Livestream.

For a complete list of the 2017 Stevie Award winners, visit http://www.StevieAwards.com/ABA.

Tickets for the June 20 awards gala in New York are now on sale.