Four Diamond Rating places the property in extraordinary company, as less than six percent of the more than 28,000 AAA-approved hotels achieve that level. 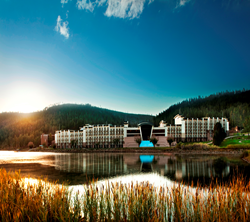 Set in an astounding mountain oasis above the hot deserts below, Inn of the Mountain Gods has become known as a beacon of luxury for Southwestern travelers.

Set in an astounding mountain oasis above the hot deserts below, Inn of the Mountain Gods has become known as a beacon of luxury for Southwestern travelers. Following the resort casino’s exciting addition of the Apache Wind Rider ZipTour at its sister resort Ski Apache in 2014 and Apache Eagle ZipRider over Lake Mescalero at Inn of the Mountain Gods in early 2015, the property completed a $2.4 million room renovation in June of 2015, and in 2016 added Broken Arrow Tap House, a 127-seat 24-hour gastro-pub inspired restaurant, all enhancing the guest experience even more.

“None of this could happen without the Tribal Administration’s vision and support,” said Frizzell Frizzell Jr., COO at Inn of the Mountain Gods. “Thanks to them, we have been able to add new features and amenities to the property including the zip lines, room renovations and more. With their support and that of the community, we can continue our mission to be the premier resort in the region.”

For more information on Inn of the Mountain Gods or to book a reservation, visit InnoftheMountainGods.com or call 1-800-545-9011.

About Inn of the Mountain Gods
Inn of the Mountain Gods is New Mexico’s premier resort-casino destination situated high in the picturesque mountains of Mescalero, New Mexico. Just outside of Ruidoso, the Inn is set in the cool, tall pines of the Sacramento Mountains where visitors enjoy clean, crisp air, breathtaking scenery, exciting entertainment and the best casino action in the Southwest. From the welcoming design of its 273 luxury rooms and suites, numerous dining options, and 38,000 square feet of action-packed gaming, Inn of the Mountain Gods has it all. Add to that a championship golf course named one of the top courses in the country by Golf Digest and Golf Week Magazine, and the country’s southernmost ski area, Ski Apache, offering the best warm-weather powder skiing in the world with 55 runs served by 11 lifts and New Mexico’s only eight-passenger Gondola, the Inn offers guests something for every season.