G-CON's CEO is recognized as a Top 10 Industry Influencer on The Medicine Maker’s 2017 Power List. 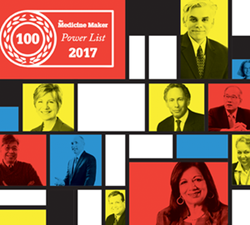 Those of us who are privileged to be colleagues of Maik have long known that we work alongside an exceptionally talented individual.

Jornitz ranked eighth in the "Industry Influencers" segment. He was recognized for his influence on the industry in implementing new technologies in regard to 1) more flexible facility assets, 2) process designs and 3) regulatory initiatives which all serve to improve aseptic processing standards.
“I feel honored by the recognition and being part of this distinguished group of experts and industry influencers. It is motivating to know one’s efforts support the industry and in particular the patients served by the industry,” Jornitz stated.

Mr. Jornitz has previously received multiple other awards including the prestigious Martin Van Trieste Pharmaceutical Science Award. This award honors a Parenteral Drug Association (PDA) member for outstanding contributions made toward the advancement of pharmaceutical science.

“Those of us who are privileged to be colleagues of Maik have long known that we work alongside an exceptionally talented individual,” said David Shanahan, Chairman of the Board of G-CON. “Formal recognition of his accomplishments is very gratifying and reflects the strength of the world-class team that we have assembled in support of G-CON’s mission to transform the cleanroom industry.”

The Medicine Maker Power List recognizes 100 pharmaceutical professionals across four categories, each made up of 25 noteworthy professionals—and each with its own top ten:

About G-CON Manufacturing
G-CON Manufacturing designs, builds and installs prefabricated, autonomous cleanroom PODs®. G-CON’s cleanroom POD® portfolio provides a number of dimensions for a variety of uses, from laboratory environments to personalized medicine and production process platforms. The POD® cleanroom units surpass traditional cleanroom structures by virtue of their scalability, mobility and the possibility of repurposing the PODs® once the production process reaches its lifecycle end. For more information, please visit the G-CON’s website at http://www.gconbio.com.