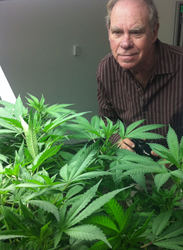 “Ed is a legend in the field, and his knowledge of cannabis cultivation is unsurpassed,” said Growers Supply’s Greenhouse Specialist Manager Jon Kozlowski.

GrowSpan Greenhouse Structures released the second installment of their blog series with the Guru of Ganja Ed Rosenthal today. In his article “Fertigation” Rosenthal breaks down the basics of fertigation and how the technique can help growing operations produce lusher, healthier crops.

The article can be read on the GrowSpan blog here.

Growers Supply and the famed cannabis expert teamed up late in 2015, and Rosenthal has provided professional insight via the company’s greenhouse-dedicated website, GrowSpan.com.

Rosenthal has been one of the industry’s most famous figures for over 40 years. He is known worldwide as a leading activist and industry authority. He teaches at Oaksterdam University, while also helping commercial growers across the globe. Rosenthal has written, edited and published dozens of books that have sold in the millions. To this day, he participates politically and continues to play an essential role in the development of cannabis policy in the United States. He is also the executive director or Green Aid: The Medical Marijuana Defence and Education Fund.

“Ed is a legend in the field, and his knowledge of cannabis cultivation is unsurpassed,” said Growers Supply’s Greenhouse Specialist Manager Jon Kozlowski.

The GrowSpan blog has been covering fertigation’s rise in popularity in recent weeks. GrowSpan’s Amanda Williams covered the technique in her article “Fertigation: Fertilizing Through Irrigation.” The article gives beginners an overview of fertigation and provides some beneficial tips for getting started, as well as some commonly used methods. Williams wraps the article up by suggesting some useful tools that commercial growers can integrate into their operation in order to get a more uniform and even nutrient distribution.

Williams’ article can be read here.

Rosenthal’s past work for GrowSpan has included articles on practices to efficiently and effectively grow cannabis. His article “Efficient Marijuana Cultivation” can be read here.