AxioMed is pleased to announce the success of the first viscoelastic Freedom cervical case in Sydney. 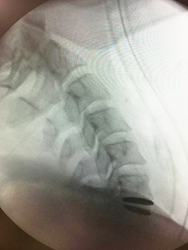 With the addition of the lateral lumbar technique, we expect AxioMed to be the worldwide leader in disc replacement surgery.

Dr. Ralph Mobbs of the Neuro Spine Clinic completed the procedure on April 28, 2017 at the Prince Of Wales Private Hospital. The procedure was performed on a 46-year-old male patient suffering from a degenerative cervical disc at level C6-C7. The patient failed conservative treatments prior to undergoing surgery.

The AxioMed viscoelastic disc is a next-generation disc replacement that restores natural disc height, lordosis, stability and motion in the human spine. AxioMed was approved in 2016 to market and sell their viscoelastic cervical and lumbar Freedom total disc replacements in Australia by the Therapeutic Goods Administration.

Dr. Ralph Mobbs spoke to the advantages of the AxioMed cervical disc after the operation, stating, "The Freedom Cervical Disc is a new and innovative treatment that I've been eager to use. I found the prosthesis matched the patient's anatomy well, restored disc height and fit very well within the intervertebral space. The disc was easily placed with AxioMed’s simple and effective instrumentation. I believe in this viscoelastic technology and its benefits and I look forward to using the Freedom Cervical Disc to treat my patients in the future."

AxioMed CEO Dr. Kingsley R. Chin explained how an experience like Dr. Mobbs’ aligns with AxioMed’s vision. “AxioMed believes it can replicate the success of total joint restoration in the spine with our innovative and advanced viscoelastic total disc replacements with a high degree of patient satisfaction," he said.

Dr. Chin added, “With the addition of the lateral lumbar technique, we expect AxioMed to be the worldwide leader in disc replacement surgery.”

About AxioMed
Founded in 2001, AxioMed began its journey of exhaustively proving the Freedom® Disc through clinical studies in the USA and Europe, research, development and testing. In 2014, KICVentures recognized the disc’s enormous potential and acquired the company into their healthcare portfolio. AxioMed owns an exclusive viscoelastic material license on its proprietary Freedom Disc technology.