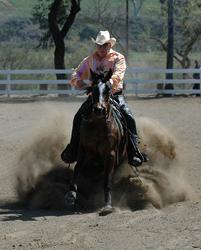 For nearly three decades, prominent actor and equine lover William Shatner has taken on perhaps his most significant role, not on TV or in film, but in real life as a tireless advocate for underrepresented communities, raising tens of millions of dollars to support hundreds of worthy charitable organizations by way of his annual philanthropic horse show event.

The Hollywood Charity Horse Show will kick off with an hour-long free Arena Show, which is completely open to the public, beginning at 5:30 p.m. and bringing together an array of world-class reining horses and their riders competing for top honors in the expansive 3,500-seat Equidome (480 Riverside Drive, Burbank).

During the not-to-be-missed Arena Show, spectators will be treated to rare and exquisite performances by the Sicilian Tenors and award-winning singer and military veteran Judy Welch of CRE Outreach, as well as a special riding demonstration by AHEAD with Horses, a longtime beneficiary of the event.

The dinner will begin shortly thereafter at 7 p.m. in the lovely Equestrian Ballroom, coinciding with an online silent auction featuring hundreds of extraordinary unique and signed items, including props from TV’s “Outlander,” “Once Upon a Time,” “Vampire Diaries,” “The Originals,” and “Doctor Who,” and films, such as X-Men, Captain America, Thor, and Star Trek. Those wanting to participate in the auction can go to http://www.horseshow.org. The auction will close Sunday, June 4 at 12 noon PT.

The Rock and Roll Hall-of-Famer Wilson, along with Warfield, both fronting the new sextet band Roadcase Royale, will then bring their passionate and rich mix of rock and R&B to life for dinner guests during the 45-minute live set. The band’s new politically charged hard rock anthem, "Not Giving Up," is available now through most digital retail outlets, including iTunes and Amazon, and also on streaming services, such as Apple Music and Spotify.

“I am thrilled to be able to present this show one more year,” said Shatner.

For more information on the 2017 William Shatner’s Priceline.com Hollywood Charity Horse Show Sponsored by Wells Fargo, or to purchase tickets or sign up for online auction bidding, visit http://www.horseshow.org.

About Roadcase Royale
Led by Liv Warfield of Prince’s New Power Generation and Nancy Wilson of Heart, Roadcase Royale has a rich background in rock and R&B. Warfield, Wilson, and their bandmates bring their decades of experience from the upper echelon of the music industry to Roadcase Royale, along with a renewed sense of direction and drive. Joining Wilson and Warfield are Warfield’s lead guitarist and musical director Ryan Waters and Heart veterans Dan Rothchild (bass), Ben Smith (drums) and Chris Joyner (keys). Each of these members shine in Roadcase Royale with their various sensibilities creating the group’s sensitive, passionate, and driving rock and R&B sound. For more info, visit http://www.roadcaseroyale.com.