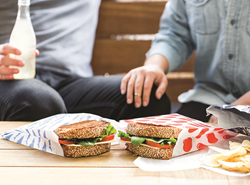 Each year, 500 billion plastic bags are used once and thrown away — but they never really go away.

An uninhabited island in the South Pacific reported to host 38 million pieces of plastic waste is a potent symbol of the plastic pollution epidemic. Joining the movement to fight back against single-use plastic pollution is the small but mighty New Paper Bag by LunchSkins the environmentally-conscious, recyclable alternative to the plastic sandwich bag that's poised to shake up lunch-packing routines for the better.

“Plastic is cheap, which is why it’s everywhere,” says Kirsten Quigley, CEO and Founder of LunchSkins. “We’re told to stop making choices that harm our planet but it's also up to us [the companies] to work together to provide more widely accessible, plastic-free alternatives.”

Plastic, especially single-use (use and toss) plastic, has overstayed its welcome. Each year, 500 billion plastic bags are used once and thrown away — but they never really go away. Discarded plastic bags clog waterways, harm wildlife, and languish in landfills, releasing toxic microplastics as they degrade over a period ranging from 10 to 10,000 years. “It’s truly ironic,” says Quigley, "that something designed for one-time use decades ago is still with us in landfills and oceans.”

The overwhelming problem of plastic pollution spurred Quigley to create LunchSkins reusable, dishwasher-safe bags back in 2008 when she was packing 20 lunches each week for her brood of four. “With every plastic bag I zipped and sent off to never see again, I kept thinking there has to be a better way.”

Driven by a mission to reduce plastic pollution one bag at a time, LunchSkins took the market by storm, scoring press points with media outlets including Real Simple, Katie Couric, and Oprah, and earning a following of sustainable snackers of all ages and lifestyles.

The New Paper Bag is the next step in the LunchSkins mission to reduce single-use plastic consumption by empowering everyone to live healthy, plastic-free lives every day.

Available July 2017 in 50-count boxes at http://www.lunchskins.com, LunchSkins Recyclable + Resealable Bags will appear in grocery and retail locations nationwide just in time for back-to-school this fall. LunchSkins also will launch a Kickstarter campaign on May 23rd to build awareness for #TheNEWPaperBag and propel efforts to market and distribute the product to stores around the United States.