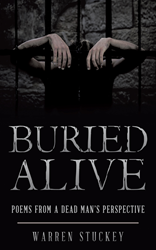 The poems inside this book will meet you wherever you are, in whatever life you have chosen.

A Maryland prison inmate has released an intimate and thought-provoking collection of poetry that explores the nature of human change and importance of self-reflection. Warren Stuckey, who is serving a life sentence at the North Branch Correctional Institution, presents verses of truth, redemption and personal transformation in his new book, “Buried Alive.”

Stuckey was convicted of first-degree murder in early 1994, a little less than a year after fatally shooting his childhood friend and fellow drug dealer Larry Erickson, according to a Baltimore Sun article published on March 13, 1994. More than two decades later, Stuckey hopes to reach out to others to encourage the pursuit of change and self-reflection.

“Your streets, your family, your friends and, most of all, your enemies play a crucial role in what you will do and are capable of doing,” Stuckey said. “But in the end, it is you who will carry the load. The poems inside this book will meet you wherever you are, in whatever life you have chosen.”

“Buried Alive” seeks to breathe vitality into the concept of true redemption through words. By way of Stuckey’s rhythmic expressions, he hopes readers will reap a raw, yet simple examination of the self and a desire to seek out their own wisdom and enlightenment.

About the author
Warren Stuckey grew up in Baltimore and is currently serving a life sentence at the North Branch Correctional Institution for convictions of first-degree murder and various firearms charges. To learn more, please visit http://www.warrenstuckey.com.