Five $75,000 prizes given annually for the Herb Alpert Award in the Arts in Dance, Film/Video, Music, Theatre, and Visual Arts 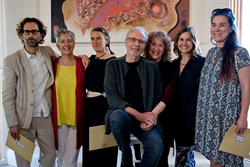 The Argonaut article, "Art Without Limits," by Christina Campodonico.

The awards recognize past performance and future promise to artists working in Dance, Film/Video, Music, Theatre and Visual Arts; an outstanding candidate in each genre receives a prize of $75,000.

“We are delighted to celebrate the Herb Alpert Award’s 23rd anniversary,” says Rona Sebastian, President of the Herb Alpert Foundation. “Each year the Award recognizes five visionary mid-career artists who expand their fields as well as our horizons. We believe that championing the arts, individual artists, and arts education – from early childhood through professional development – has profound social, cultural, and personal impact. This is at the core of the Foundation’s interests.”

“It’s particularly meaningful at this divisive moment to honor and support this year’s winners who are rigorous in their reach, alert to the world, and make community as much as they make art,“ says Irene Borger, Director of the Herb Alpert Award in the Arts. She describes why they were chosen by the 2017 panelists:

“The Dance panel was thrilled to select choreographer luciana achugar, for her exciting, anarchic artistry, her big vision, her capacity to visualize and enact pleasure and beauty in the transcendent body, unflinching willingness to look at socio-political concerns and how they impact individuals, and no less than the creation of pagan experiences and ‘new rituals.’”
luciana achugar's Short Bio
Panelists: Olga Garay-English, Ralph Lemon, Carla Peterson

“The Film/Video panel honors artist Kerry Tribe, for her fearlessness in rethinking and readdressing social issues, her ability to make surprising and moving connections, for her demanding, pleasurable, transformative, and accessible work. They value her empathetic, generous and rare ability to immerse her audiences in new ways of seeing the world.”
Kerry Tribe's Short Bio
Panelists: Erin Christovale, Stephen Gong, Leslie Thornton

“Composer Eve Beglarian was chosen as the winner in Music for her prolific, engaging, and surprising body of work, her deep engagement with different communities, her dedication to continuing to make experimental work outside the canon, and her risk taking in both music and life with no separation between these spheres.”
Eve Beglarian's Short Bio
Panelists: John King, Tania León, Nicole Mitchell

“Director Daniel Fish was selected by the Theatre panel for his mesmerizing, bold complex imagination, his steadfast commitment to the art of possibility, the ways he unceasingly questions what theatre might be, his amplification of ideas through his independent artistic explorations, and for his dedication to widening the forms for performance, enlarging ones experience in American theatre.”
Daniel Fish's Short Bio
Panelists: Kristy Edmunds, Tom Sellar, Meiyin Wang

Photos of 2017 winners here courtesy of the Herb Alpert Award in the Arts.
Short bios of all winners can be found here.

Photo by Francesco Da Vinci. Herb Alpert and Lani Hall at the Herb Alpert Award in the Arts Lunch 2017.