Show Me the Deal: YA Survey Shows Consumers Flock to Quick-Service Restaurants When there are Discounts and Offers Involved 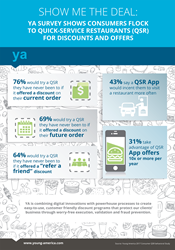 Editor’s Note: Infographic and Survey Results at Bottom of Release

Show Me the Deal: YA Survey Shows Consumers Flock to Quick-Service Restaurants When there are
Discounts and Offers Involved

Minneapolis, May 18, 2017 – A recent study by YA, an industry market leader in delivering high-impact omni-channel marketing promotions for the nation’s most respected brands, shows that discount programs for quick service restaurants (QSRs) are highly effective in changing consumer behavior.

“In the highly competitive QSR field, restaurants that make discount offers part of their core marketing program are able to increase loyalty and word-of-mouth referrals,” said YA Vice President of Mobile Sales Mark Shelley. “Getting new customers in the door is the first step in creating long-term brand advocates.”

The survey also shows missed opportunity when it comes to mobile applications (Apps) that offer QSR deals. While just over one-quarter (28 percent) of respondents said they had at least one QSR App on their mobile device, nearly half (43 percent) said a QSR App would incent them to visit a restaurant more often. And of those who do have an App, the highest percentage of respondents (31 percent) say they take advantage of offers 10 times or more per year.

Interestingly, when analyzing the demographics of QSR App users, younger consumers and those who have higher household incomes are the heaviest users.

“It’s very common for people in their late 30s and early 40s to have dual incomes and young kids at home, and delivered food is a convenience for which they’re willing to pay,” said Shelley. “As such, marketing promotions programs that segment audiences to cater to their life situations can be very successful.”

The survey also shows affinity for mobile applications, as QSR Apps are the top way respondents say they want to receive information, followed by instant rebates and newspaper coupons.

1.    How likely would you be to try a QSR you’ve never been to if it offered a discount on your current order?

2.    How likely would you be to try a QSR you’ve never been to if it offered a discount on a future order?

3.    How likely would you be to try a QSR you’ve never been to if it offered discounts or free food if you referred a friend?

4.    To what extent would you agree with the following: “I would participate in a QSR program that allowed me to collect points for free items on future visits” (e.g. Visit us 5 times and your 6th meal is free)

5.    If you are participating in a loyalty program, how many trips would you be willing to make to a QSR before you received your reward (e.g. free sandwich)?

6.    What would most incent you to refer a friend to a QSR?

9.    If you received offers for deals through the QSR App, how often do you take action on the offer?


10.    Does a QSR App cause you to visit that restaurant more often?

11.    How do you prefer to receive updates and offers from a QSR?

12.    How much more likely are you to choose one QSR over another if you have a discount or BOGO or offer?

13.    How likely would you be to visit a QSR that was offering a deal, such as a discount or BOGO, even if it was out of your way?

About YA
For 45 years, YA has been a leader in promotional marketing services. We deliver high-impact, data-driven, digital, social and mobile promotions, such as rebates and rewards, enter to win, referral and loyalty programs, to the nation’s most respected brands. With deep expertise across multiple industries, our end-to-end management of 3,500+ promotions each year creates tens of millions of consumer interactions annually. We then analyze these interactions to understand the drivers of consumer behavior. This makes us experts at turning even first-time customers into loyal brand advocates who take action, buy more and spread the word.