Pastor at The House of Yahweh writes article laying out the steps taking place right now are in line with Bible Prophecy and reveals what to expect next. 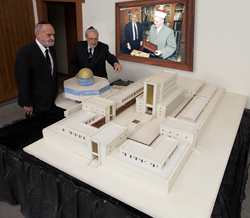 Temple model at The House of Yahweh

We traveled to the Middle East teaching Israeli Hebrews and Palestine’s Arab leaders these perfect plans to have perfect peace, and everyone I met with agreed with this Scriptural solution

Yisrayl Hawkins, Pastor and Overseer at The House of Yahweh in Abilene, Texas, has published a new article that lays out Prophetic details concerning the Rebuilding of the Third Temple in Jerusalem. The publication titled, “It’s Time to Rebuild the Temple on Mount Zion!” says there are many Prophecies in the bible that show the Temple will be rebuilt in this generation. He says with the Trump administration in full-force nudging all parties to come to an agreement on the Middle East conflict, the time is now.

Yisrayl cites Scriptures that show specific details about how the Temple will be rebuilt. He says The House of Yahweh has spent years researching the Prophecies, and their engineers spent years building a perfect replica of the Temple according to the Prophetic instructions. Yisrayl spent a lot of time traveling around the Middle East sharing this information. He says he was well received by most government leaders there.

“We have the Temple model with the perfect blueprint according to Prophecy. Anyone can see what it looks like and how we know this to be so,” Yisrayl says.

Yisrayl wrote a publication some years back called “A Peaceful Solution to Building the Next Temple in Yerusalem” which goes into vivid detail and further expounds on these Prophecies and how the group was able to compile the perfect Prophetic blueprint.

Yisrayl explains the Prophet Yechetzqyah’s (Ezekiel’s) visions, which he says show there is indeed a Perfect Peaceful Solution to the Arab-Jewish conflict.

Yisrayl says he’s excited to see this Prophecy take place and is ready with blueprint in hand to assist in getting the Third Temple re-built.