A California beach home restored by Diane Keaton is for sale and featured this week at TopTenRealEstateDeals.com. 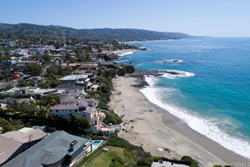 A California beach home restored by Diane Keaton is for sale.

Charmer Diane Keaton, in her trademark suits and turtlenecks, is most well known as an Oscar-winning actress in films that are today's classics. From her first appearance in “The Godfather” to her Oscar-winning performance in “Annie Hall” and a string of other great films chalking up $1.1 billion in box office sales, Keaton also found time to date both Warren Beatty and Al Pacino.

Now at age 71, Diane has not slowed down having written three books, well-known for her photography, mother of two adopted children, and owns her own wine company, The Keaton, with reds described as rich and intense and a new white wine on its way. In her spare time, she is a real estate tycoon with a long history of buying, remodeling and selling houses in enviable locations. Homes that exude as much charm as the woman herself.

Newly offered for sale is one of Diane's early restoration projects, a Laguna Beach house steps from the sand and with views of the Pacific Ocean, beach and rugged cliffs spilling into the ocean. Built in 1928 for the J. Roy Smith orange tree groves family when the idea of having a beach house was coming of age in California, there were still many excellent lots from which to choose. The Smiths chose a bluff overlooking the wide beach of Shaw’s Cove, which afforded protection from storm waves and an expansive view. It was built in the Mediterranean Revival style with stucco, decorative Spanish tile accents, wood beams, carved doors, ironwork and terraces surrounded by lush plantings and an outdoor fireplace to toast one’s toes on chilly evenings.

Diane is one of a number of Hollywood celebrities including Ellen DeGeneres, Jennifer Aniston and Meg Ryan who collect and sell homes as a sideline; she was no stranger to building restoration as she had watched her father do the same for most of her childhood. In 2004, Keaton bought the beach house for $7.5 million and worked her magic in the restoration, preserving and accentuating its fine original details. Taking two years to complete, she sold the 4,158-square-foot, four-bedroom, six-bath house in 2006 for $12.75 million. It recently went back on the market at $15.89 million.

Shaw’s Cove beach house restored by Diane Keaton from 2004 through 2006 is again on the market. Listing agents are Hanz Radlein of Berkshire Hathaway HomeServices California Properties and Michael Johnson of Villa Real Estate.