Propper International has teamed up with the Richard Petty Driving Experience as a full apparel and gear sponsor for the 2017-18 season. 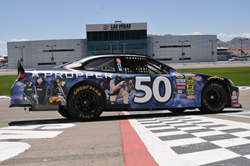 Propper has wrapped one of the RPDE racecars in its company colors and logo, with the number 50 on the sides and top in honor of Propper’s 50th anniversary.

Propper's military heritage was a perfect complement to the mission of both organizations.

In addition to providing apparel and gear to Richard Petty Driving Experience staff, Propper will wrap one of the RPDE racecars in its company colors and logo, with the number 50 on the sides and top in honor of Propper’s 50th anniversary. Started in 1967, Propper’s first military contract provided the iconic white Dixie Cup caps to the United States Navy. Over the next five decades, the company grew to become the country’s largest supplier of BDUs and ACUs to the US military. In 1991, Propper branched out into the commercial market to provide tactical gear and apparel to law enforcement personnel and civilians.

“NASCAR has a long history of supporting and honoring the men and women who fight for our freedom,” said John Negrau, VP, Marketing & eCommerce for Propper. “Our military heritage was a perfect complement to the mission of both organizations.”

Richard Petty Driving Experience puts drivers in a NASCAR-style racecar for an adrenaline-pumping thrill of a lifetime that gets them as close to actual racing than they will ever get at more than 15 tracks around the country, including Daytona, Indy, Talladega, and Las Vegas.

Propper is proudly celebrating 50 years in business in 2017. Making tactical gear with a purpose has been a way of life for Propper since their first U.S. Navy contract in 1967. Today, Propper designs and manufactures tactical clothing and gear that keeps military, law enforcement, and public safety professionals protected whether they’re in the service, on the job, or off for the weekend.

For more information on Propper:
http://www.propper.com

In addition to the wrapped racecar, Propper is providing apparel and gear to the RPDE staff.