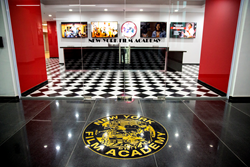 We're proud to bring our innovative film and acting for film programs to Mumbai, India, an epicenter for world cinema. We look forward to teaching a whole new generation of Indian filmmakers and actors.–NYFA President, Michael Young.

The New York Film Academy (NYFA) proudly introduces its newest location in Mumbai, India, which welcomed its first students this month. Mumbai is located in the heart of the world’s largest film industry and is the home of Bollywood.

NYFA Mumbai workshops are held at the Urmi Estate (95 Ganpatrao Kadam Marg, Lower Parel [West] Mumbai, Maharashtra 400 013, India). The Urmi Estate is a modern 41 story skyscraper located in the heart of the city.

"The New York Film Academy turns 25 this year, and we’re thrilled to add this beautiful new location in Mumbai to the global NYFA family," said Kitty Koo, NYFA Vice President – Mumbai, India. “There is no place better than Mumbai, India, the land of Bollywood."

As is the case with all of NYFA’s locations and workshops, the Mumbai filmmaking workshops focus on learning in a hands-on film environment where students have the opportunity to make a fully-realized final film.

The acting for film workshops provide students with a strong foundation of acting skills with a specific focus on the basic elements of the craft of acting, using Stanislavski's System, scene study, and monologue work as starting points. Students also participate in courses aimed specifically at training the actor for the technical requirements of acting on a film set.

"We're proud to bring our innovative film and acting for film programs to Mumbai, India, an epicenter for world cinema," added NYFA President Michael Young. "We look forward to teaching a whole new generation of Indian filmmakers and actors."

As those who have taken a workshop with NYFA know, the workload is considered intensive, meaning students must be prepared to live and breathe the program during their enrollment.

“Taking that experience from NYFA, I was able to act as a major supporting role in ‘Baahubali’,” said NYFA alumnus Rakesh Varre, who plays Setu Patti in “Baahubali: The Conclusion.” The film has become the highest grossest Indian film in history, and has even been impressive in the North American market.

For those interested in studying in Mumbai, please visit http://www.nyfa.edu/mumbai for more information.

With locations all around the world, the New York Film Academy has grown into an international film and performing arts school with a focus on learning by doing, providing its students with hands-on instruction.

The New York Film Academy’s Florence, Italy location holds film and acting programs in a renovated renaissance era building, across the street from Le Cappelle Medici, moments away from the Duomo. Steven Spielberg, Martin Scorsese, Bruce Springsteen, Al Pacino, Robert Downey Jr., Kevin James, Jamie Foxx, and Jodie Foster are among the many figures in the film industry that have sent their family members to study at the New York Film Academy. For more information, please visit nyfa.edu.