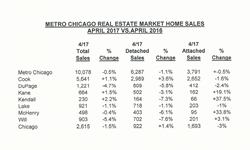 According to RE/MAX, home sales for the month were 0.5 percent lower than during the same month last year, totaling 10,078 units. The median sales price climbed 6.3 percent to $245,000.

“In our view, the small sales decline largely reflects the impact of two factors, the relatively low inventory of homes for sale this spring and the related fact that we have worked through a large portion of the supply of foreclosed properties that was such a big part of this market just a few years ago,” said Jack Kreider, executive vice president and regional director of RE/MAX Northern Illinois.

Foreclosures represented just 8 percent of all April home sales this year but accounted for 20 percent of April sales as recently as 2015.

“If you exclude foreclosures from April home sales for this year and last, sales this year were 5 percent higher,” Kreider said.

Another sign of strength in the housing market was the continued decline in the average time that homes sold during the month were on the market before going under contract. The April average was 90 days, down from 99 days a year earlier and from 100 days in March of this year. It was the lowest average market time posted in April since 2005.

Sales data used by RE/MAX is collected by MRED, the regional multiple listing service. It covers detached and attached homes in the Illinois counties of Cook, DuPage, Kane, Kendall, Lake, McHenry and Will. Detached homes are typically stand-alone single-family dwellings. Attached homes include condominium and cooperative apartments along with townhouses.

Home sales activity varied within a narrow range across the seven metro counties, rising slightly in Cook, Kane and Kendall, but declining in the four other counties and in Chicago. The largest decrease was 5.4 percent in Will

The median sales price, however, was up across the board, most notably in Will, where it rose 12.3 percent, and in McHenry, where it gained 10.6 percent. The median also rose 5.4 percent in Cook, which included a 3.3 percent increase in Chicago, and it was up 3.9 percent in DuPage, 8 percent in Kane, 4.4 percent in Kendall and 5.7 percent in Lake.

April sales of detached homes totaled 6,287 units, down 1.1 percent from the same month last year, while the median sales price gained 7.1 percent to $262,000, and average market time was 104 days, eight days less than the prior April.

Sales activity rose 3.6 percent in Cook County, including a 1.4 percent increase in Chicago, but fell in the six other counties. Declines ranged from 7.6 percent in Will to 1.1 percent in Lake.

Sales activity in the attached home segment eked out a 0.5 percent increase in April on sales of 3,791 units, while the median sales price rose a modest 2.9 percent to $209,900. Average market time fell to just 67 days, the lowest figure recorded for April since RE/MAX began tracking that data in 2005.

Sales activity was down 1.6 percent in Cook, which still accounted for 70 percent of all attached sales in the metro area. That included a 3 percent decline in Chicago. Elsewhere, several counties saw sharp increases in attached sales, with Kendall up 37.5 percent, McHenry up 33.8 percent and Kane up 19.1 percent. Sales were also up 3.1 percent in Will, but fell 2.4 percent in DuPage and 1 percent in Lake.

All seven counties had average market times of 73 days or less, with Kendall posting a lightning-fast average of 32 days.

RE/MAX agents consistently rank among the most productive in the industry. In 2016, RE/MAX Northern Illinois agents averaged 18 transaction sides. RE/MAX has been the leader in the northern Illinois real estate market since 1989 and is continually growing. The RE/MAX Northern Illinois network, with headquarters in Elgin, Ill., consists of more than 2,250 sales associates and 103 independently owned and operated RE/MAX offices that provide a full range of residential and commercial brokerage services. Its mobile real estate app, available for download at http://www.illinoisproperty.com, provides comprehensive information about residential and commercial property for sale in the region. The northern Illinois network is part of RE/MAX, a global real estate organization with 110,000+ sales associates in 100+ nations.

EDITOR’S NOTE: RE/MAX® is a registered trademark. Please spell in all caps. Thank you. This release is posted at blog.illinoisproperty.com.