Author Jack Barnhart’s New Book “And Then There Was Reasonable Doubt: The State of Ohio v. Charles Keith Wampler” Is the True Story of a Wrongful Murder Conviction

Recent release “And Then There Was Reasonable Doubt: The State of Ohio v. Charles Keith Wampler” from Page Publishing author Jack Barnhart is the true story about an investigation in 1982 that led to the wrongful conviction of a sixteen-year-old boy for the brutal murder of Robert “David” Lowell, a thirteen-year-old whose nude and mutilated body was found in a field along I-75. This book addresses the official misconduct of police, prosecutors, and lawyers that resulted in an innocent boy forced to become a man behind the bars of an Ohio prison. 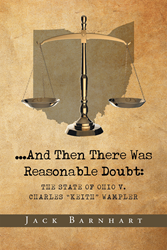 Jack Barnhart, a licensed private investigator in Columbus, Ohio and a former special agent with the US Department of State for twenty-two years, has completed his new book “And Then There Was Reasonable Doubt: The State of Ohio v. Charles Keith Wampler”: a gripping and potent true crime story depicting the callous approach of the Office of the Governor and the legal system in general when faced with a moral imperative to correct a gross miscarriage of justice.

“The month of February is normally cold in Ohio. February 1982 was frigid in Moraine, Ohio, because on or about February 6, 1982, one life would tragically end and another one would be changed for- ever. On February 6, 1982, at approximately 3:50 p.m., the body of Robert David Rowell (known as David) was discovered in a vacant field along Krietzer Road in Moraine, Ohio. On the surface, this appears similar to many crimes committed in the United States every day. However, when one looks past the surface, one finds a broken criminal justice system. One finds a criminal justice system that is more concerned with egos and reputations than seeking the truth and justice. On February 6, 1982, the wheels of the criminal justice system in Montgomery County, Ohio, would begin to grind and break down a sixteen-year-old boy, and by the end of the year, Charles “Keith” Wampler (known as Keith) will be forced to become a man behind the bars of the Ohio prison system, after having been convicted of a crime that he did not commit.”
-Jack Barnhart

Published by New York City-based Page Publishing, Jack Barnhart’s powerful and heartbreaking account offers a convincing indictment of a criminal justice system that not only makes devastating errors but proves reluctant to correct them when presented with incontrovertible proof of the wrongful incarceration of an innocent young man.

Readers who wish to experience this gripping work can purchase“And Then There Was Reasonable Doubt: The State of Ohio v. Charles Keith Wampler” at bookstores everywhere, or online at the Apple iTunes store, Amazon, Google Play or Barnes and Noble.