Author P.A. Gawel’s new book “Son of a Son of the Thin Man in Murder by Proxy” is a mystery filled with colorful characters and unexpected plot twists

Recent release “Son of a Son of the Thin Man in Murder by Proxy” from Page Publishing author P.A. Gawel features Nicholas Charles III, a direct descendent of the famous post-depression era detective, and his motley crew as they set out to find the missing pieces of the puzzle to Nick’s stolen fortune and murderous events happening around town and across the country. 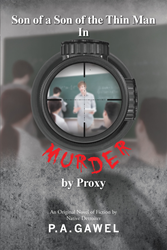 P.A. Gawel, a native of Detroit and dedicated mystery writer, has completed his new book “Son of a Son of the Thin Man in Murder by Proxy”: a gripping work of detective fiction with an underlying strain of comic relief assisted by the witty dialogue and word play between the characters as some try to hide their hideous secrets from the others.

Published by New York City-based Page Publishing, P.A. Gawel’s exciting tale presents more than one side of the mystery as Nick and his group of misfits track clues around the city to find out “who done it?”

Murder after murder in Detroit unites an unlikely assortment of characters to solve the murder by proxy affair. From hoity-toity LA, the son of the son of the Thin Man is forcibly transitioned to blue-collar Detroit. Nicholas Charles III, great-grandson of the famed Thin Man, takes up residence in Detroit and spearheads the charge from his recently renovated biergarten, Polkaholics. But little does the crew know who they are up against. The vagabond sleuthing team are street smart folks and wise to the skullduggery perpetrated by the unwary assailants. Join Nick and his crew in a tale mixed with a bit of adventure, fantasy, comedy, romance, and an overwhelming mystery.

Readers who wish to experience this entertaining work can purchase “Son of a Son of the Thin Man in Murder by Proxy” at bookstores everywhere, or online at the Apple iTunes store, Amazon, Google Play or Barnes and Noble.