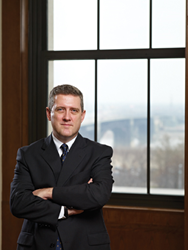 Federal Reserve Bank of St. Louis President James Bullard addressed “Recent Developments in U.S. Monetary Policy” during his presentation at an event hosted Friday by the Association for Corporate Growth at Washington University in St. Louis.

Bullard explained that U.S. macroeconomic data since the March 2017 meeting of the Federal Open Market Committee (FOMC) have been relatively weak, on balance. For instance, he noted that U.S. inflation and inflation expectations have surprised to the downside in recent months.

In discussing the FOMC’s March increase in the policy rate (i.e., the federal funds rate target), he noted that the financial market reaction has been the opposite of what would typically be expected. “This may suggest that the FOMC’s contemplated policy rate path is overly aggressive relative to actual incoming data on U.S. macroeconomic performance,” he said.

In explaining these points, Bullard explored the following topics:

Recent Economic Growth in the U.S.

He said that real GDP growth, as measured from one year earlier, has averaged just 2.1 percent over the last seven years and that the last two years have shown very little change. “A natural conclusion is that the economy has converged upon a growth rate of about 2 percent,” he said, adding that the U.S. economy is not likely to move meaningfully off of this trend in 2017.

There is also the question of residual seasonality, he said, explaining how first-quarter real GDP growth in recent years has generally been lower than in other quarters, despite the underlying data being adjusted to remove seasonal effects. He noted that the magnitude of this effect is debatable and that it may be better to use real GDP growth measured from one year earlier to gauge performance.

“If residual seasonality is the issue, then second-quarter real GDP growth should be discounted appropriately,” Bullard added.

He then described how the financial market reaction to the March policy rate increase differed from what was expected.

He noted that the increase was viewed in financial markets as suggesting a policy rate increase at the upcoming June FOMC meeting as well. “Ordinarily, when the policy rate is on an increasing path, longer-term interest rates are expected to rise in tandem, both inflation and inflation expectations are expected to remain consistent with the FOMC’s 2 percent inflation target, and financial market expectations of the policy rate path should remain consistent with the Committee’s projections,” Bullard explained.

Hence, he noted that this financial market reaction may suggest that the FOMC’s contemplated policy rate path is overly aggressive relative to incoming macroeconomic data.

“Labor market improvement has been slowing, perhaps close to a trend pace, given the current labor productivity growth regime,” he said.

With U.S. unemployment low, Bullard discussed whether that means that inflation is about to increase substantially. Given current estimates of the relationship between unemployment and inflation, he indicated that he doesn’t expect a meaningful increase in inflation.

“Even if the U.S. unemployment rate declines substantially further, the effects on inflation are likely to be small,” he said.