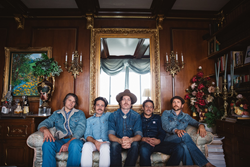 Despite the fact that the band plays acoustically, the fierce energy the quintet is anything but Comatose.

The 25th Annual Summer Series of live music, dinners, cocktails, picnics, dancing, Kid Zone, and fun for all will begin on Saturday July 8th with the new-grass sound of Brothers Comatose. Infused with a sense of relaxed, experienced confidence, The Brothers Comatose offer a southwestern-tinged, rowdy string band sound. Their undeniable top-flight musicianship is a combo of brothers Ben and Alex Morrison, guitar and banjo, and lead vocalists, fronting this rocking string band that has become a West coast headliner and national touring act in a mere handful of years. With bassmaster Gio Benedetti and stellar accompanists Philip Brezina on fiddle and Ryan Avellone on mandolin, their high energy, audience engaging shows have caught fire with fans from San Diego to Seattle to Salt Lake to Silk Hope, NC and beyond.

The Summer Nights series has been created to celebrate diversity, find commonalities, and bring generations together through live music. There will be five evenings of community building through the arts.

The Kanbar Center for the Performing Arts is the Performing Arts Department within the Osher Marin Jewish Community Center in San Rafael, California. All are welcome, no membership is ever required to attend. The Center is a long-standing Marin non-profit, centrally located in Marin County and just 1/2 mile east off Hwy 101.