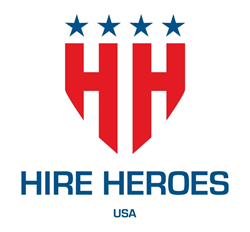 Already, we have achieved a 41 percent increase in confirmed hires from this time last year. And, compared to 2015, it’s an extraordinary growth of 153 percent.

National nonprofit Hire Heroes USA, the preeminent organization providing employment services to transitioning U.S. military members, veterans and military spouses across the United States and around the world, has appointed Marshall Lauck, President of J. Walter Thompson INSIDE and former COO for JWT Atlanta, as its new Chairman of the Board.

The appointment of Lauck, who is also a Marine Corps veteran, comes amid news that Hire Heroes USA set a record of 200 veterans and military spouses hired within a single week.

“Hire Heroes USA continues to set the standard for effective, empowering and personal support to veterans and military spouses as they transition from active duty to full time employment. I am incredibly proud to follow the path set by former Chairman John Bardis and will continue to work with my fellow board members, Brian and the entire Hire Heroes USA team to drive results like the ones we saw last week,” says Lauck.

Brian Stann, President and CEO of Hire Heroes USA and a Marine Corps combat veteran, says the nonprofit - which recently launched a new job board, held its first virtual career fair and continues to align itself with a wide-range of respected employment partners that span small business to Fortune 100 companies – will remain a top resource for transitioning military members, veterans and military spouses.

“Hire Heroes USA’s incredible impact on veteran and military spouse employment grows day-by-day, and every member of our team plays a vital role in that effort. Already, we have achieved a 41 percent increase in confirmed hires from this time last year. And, compared to 2015, it’s an extraordinary growth of 153 percent. By any standard, this is an exceptional achievement,” said Stann, adding, “Hire Heroes USA continues to lead the way in veteran hiring and we do that through hard work, innovation and a level of humility and servant leadership that is making a very real and measurable impact.”

Since 2007, the organization’s numbers speak volumes. To date, the nonprofit has helped more than 16,500 veterans and military spouses find meaningful careers in the civilian workforce, generating an estimated economic impact of nearly $200 million. This year alone, Hire Heroes USA has seen a 20 percent increase in people seeking its services.

Lauck replaces John Bardis, founder and former CEO of MedAssets, who was recently named Assistant Secretary for Administration at the U.S. Department of Health and Human Services. Bardis originally founded Hire Heroes USA, over 10 years ago, to address his concerns for unemployed veterans.

About Hire Heroes USA:
Headquartered just north of Atlanta, in Alpharetta, Ga., with seven additional branch offices around the country, Hire Heroes USA is a Charity Navigator 4-Star rated national nonprofit that provides consistently effective, individualized career coaching services to transitioning military members, veterans and military spouses with an uncompromising focus on results. For more information about our mission, our services, and how to get involved as a corporate partner, employment partner, donor, or volunteer, please visit us online at hireheroesusa.org and follow us on Facebook, Twitter, LinkedIn, and Instagram.