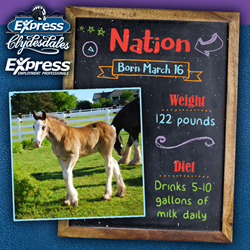 More than 4,000 people from 12 countries helped christen the newest Express Clydesdale of Express Employment Professionals with the name “Nation” as part of an online poll.

Fans from around the world, in places such as Sweden, Mexico, Chile and New Zealand, fell in love with the two-month-old black-and-white Clydesdale who was one of two horses born this spring at the Express Clydesdale barn in Yukon, Oklahoma. The rambunctious youngster weighed 122 pounds at birth and is expected to eventually stand more than 8 feet high. Like most growing animals, Nation spends his days eating and sleeping with his mom, Ruby, nearby.

The other new addition is a filly named Jewel who was born shortly before Nation. The two are part of a program that began in 2015 to help offset a dramatic decline in the breeding of these rare gentle giants.

The name “Nation” was nominated in honor of a 13-year-old boy who has been visiting the Express Clydesdales barn since he was a little boy. The final poll results included:

“We are thrilled that our new Clydesdale has a strong name chosen by beloved fans,” said Bob Funk, CEO and Chairman of the Board of Express. “Our team at the barn has done a wonderful job taking care of these beautiful horses during the first few critical months of life, and we look forward to the day Nation and Jewel can join the rest of our Clydesdales on the hitch.”

As ambassadors for Express Employment Professionals, the Express Clydesdales make nearly 200 appearances to Express offices throughout the U.S. and Canada annually, with many of the promotional appearances serving as an opportunity to raise funds for Children’s Miracle Network Hospitals, and other charities.

The Express Clydesdales have participated in many nationally recognized parades and promotional events including: Macy’s Thanksgiving Day Parade, Tournament of Roses Parade, and the St. Patrick’s Day Parades in Savannah, Georgia, and Chicago. The award-winning Clydesdales earned the title of World Champion eight-horse hitch at the 2015 World Clydesdale Show in London, Ontario, and won first place in the four-horse, six-horse, and elite six-horse hitch competitions at the 2014 Wisconsin State Fair in Milwaukee, Wisconsin.

In 1998, Funk, who owns Express Ranches, visited the longstanding Canadian Western Agribition in Regina, Saskatchewan. It was there that he fell in love with the rare and beautiful black-and-white Clydesdales, and started purchasing them to become ambassadors for Express Employment Professionals.

Throughout the years, the Express Clydesdales have enjoyed many historic moments while representing Express Employment Professionals, including escorting Prince William and the Duchess of Cambridge at the Calgary Stampede in 2011.