Costs and career paths key drivers of the college decision 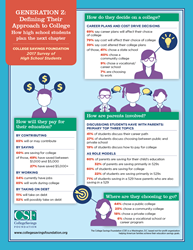 Showing children how to save for their own educational future is a powerful lesson for parents to impart. These findings demonstrate that it works. -- CSF Chair Richard Polimeni

Today’s high school students are taking a pragmatic approach to planning and paying for their higher education – targeting schools that will lead them to the careers they seek while keeping costs in check. Sophomores, juniors and seniors surveyed by the College Savings Foundation in its eighth annual How Youth Plan to Fund College survey also appear to be relying less on external funding such as loans and scholarships and instead on their own savings and expectations for working through college.

Costs and career paths were two key elements of their college decisions, with 79% of students saying that costs have been a factor in determining which college to attend, and 69% said that their career plans would affect their school choice.

“We are pleased to see this year’s high school students demonstrate a strong appetite for making responsible cost-effective choices,” said Richard Polimeni, Chair of the College Savings Foundation. “This bears out the emerging profile of Generation Z students as financially careful and debt averse.” Gen Zs are young people born after the mid- to late-1990s.

Tendency to Save, Avoidance of Debt

How are high school students planning to pay for college? Our survey found 60% are saving, with 22% of them choosing 529 college savings plans as their primary way to save. High school students appeared to be modeling their parents’ behavior: 60% said their parents are saving, with 32% saving primarily in 529 college savings plans. In fact, 71% of those students who are primarily saving in 529s have parents who are also doing so.

“Showing children how to save for their own educational future is a powerful lesson for parents to impart. These findings demonstrate that it works,” Polimeni said.

At the same time, reluctance to take on debt showed up in student responses, with 69% saying they were concerned about paying back student loans. This year’s survey showed a ten-point drop among students who planned to take on debt, to 11% from 21% last year. Including those who would “possibly” take on student loan debt, the number also dropped to 63% from 71%. In addition, those planning to take financial aid dropped to 49% from 56% last year.

College Choice is Widespread and Varied

Most students, 87%, had talked to their parents about their involvement in funding college. Dominating those conversations were what career path the child wants to follow (41%), what type of school they want to go to (public or private) (27%), and how college costs would be paid (19%).

Over the last several years, the CSF Youth survey has tracked an increase in students planning to attend community college, and this year it showed a jump of five percentage points, from 20% to 25%. Among all surveyed, 44% are choosing public college; 18% private college, and over 6% are choosing vocational school or career programs.

Not only is career a deciding factor in students’ choice of school, but also 39% of students said that costs had caused them to change their higher education paths:

College costs were also a factor for 56% of students in deciding to attend college part- or full-time.

“We are seeing a broad embrace of all kinds of education – from traditional four-year, to community college and vocational schools, as young people consider at the outset what is the best career path for them,” Polimeni added.

The 2017 How Youth Plan to Fund College survey reached over 500 high school sophomores, juniors and seniors across the country via Survey Monkey. The College Savings Foundation (CSF) is a Washington, D.C.- based not-for-profit organization helping American families achieve their education savings goals. http://www.collegesavingsfoundation.org