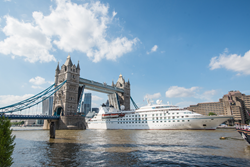 These 20 new itineraries are just the latest development in response to our growing customer demand, we’re keenly focused on offering more and varied sailings that effectively leverage our fleet of six small ships.

The sailings, running April through October, include a bevy of unique “small ship-only” experiences, like cruising the impossibly narrow Trollfjord in the Lofoten Islands; docking in downtown London near the Tower of London, where guests can marvel at Tower Bridge as they sail underneath the iconic structure; or tucking into exclusive San Remo on the Riviera of Flowers, known as Italy’s own Monte Carlo.

Windstar’s three all-suite power yachts have opened up new places for the company to explore, including more ports in Northern Europe and smaller, charming ports in the Mediterranean. The yachts are perfectly suited to sailing into smaller harbors and fjords, scenic coastal cruising, and traversing larger distances at higher speeds.

Windstar’s destination expansion brings a ship to Asia later this year on a host of new itineraries, also on tap for 2018 are recently announced new voyages in Alaska, Canada and New England.

Europe 2018 cruises will have something for everyone, from shorter week-long sailings to epic multi-week voyages. Here are a few notable highlights in Northern Europe and the Mediterranean for 2018 (see below for a full list of the new Europe 2018 sailings):

Secrets of the Faroe, Shetland & Orkney Islands – Difficult to get to and often listed on “the traveler who has done it all’s must-see list,” the remote islands of the North Atlantic are perfectly suited to exploration by small ship. Most cruise ships merely stop briefly on their way to Iceland, but Windstar is the only cruise line to offer a seven-day journey (round trip from Edinburgh) to these wild landscapes, with access to Shetland ponies, Atlantic Puffins, and the opportunity to meet the laird of a castle.

Norway’s Famous Fjords – With a focus on scenic cruising in some of the best fjords in Norway, this eight-day, round-trip journey from Copenhagen puts guests into ports like Geirangerfjord and Sognefjord, which are stunning from every angle. Windstar will ensure guests can take advantage of the region’s hiking, kayaking, and fishing opportunities, as well as immerse them in the traditional mountain lifestyle with visits to local sheep farms.

Sailing Southern Italy & Croatia – Windstar’s new 11-day exploration of both coasts of Italy and the Croatian Riviera lets guests take in medieval walled cities, glittering resort towns, and some of the finest cuisine in the Mediterranean. From Rome to Venice, the itinerary includes two stops in trendy Puglia’s whitewashed villages: Bari and Brindisi.

Hidden Harbors of the Côte d’Azur – From Nice to Barcelona over eight days, this sailing visits less-frequented ports of call along the famous coastline. With stops in Bastia, Corsica; Le Lavandou, Marseille, and Sanary-sur-Mer in France; as well as Palamos in Spain, guests can enjoy plenty of palm-lined promenades, local delicacies like Provençal bouillabaisse, and an eclectic mix of art and architecture.

For additional information private yacht-style cruising with Windstar, contact a travel professional or Windstar Cruises by phone at 877-958-7718, or visit http://www.windstarcruises.com.