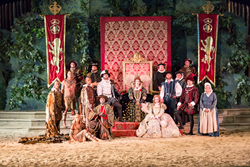 Presented by PNC Bank, several special events have been planned for the 80th Anniversary to include pre-show talkbacks with Director, Ira David Wood, III, Production Designer, William Ivey Long and other artistic staff.

The 2017 Opening Night of The Lost Colony is less than two weeks away. This summer will mark the 80th Anniversary Season of Paul Green’s The Lost Colony. Known as “'History’s Greatest Unsolved Mystery’”, performances are held Mondays through Saturdays from May 26th to August 19th at 7:45 PM in the Waterside Theatre located in the Fort Raleigh National Historic Site at the north end of Roanoke Island on the Outer Banks of North Carolina.

The Lost Colony is the “grandfather” of all outdoor dramas and is produced by the Roanoke Island Historical Association (RIHA), a non-profit whose mission is to celebrate the history of the first English colonies on Roanoke Island, North Carolina, through drama, education, and literature. Over the decades in production, The Lost Colony has evolved into a statewide and national treasure. It has served as the training ground for over 5,000 actors and technicians, including such famous personalities as Andy Griffith, Terrence Mann and William Ivey Long. It has entertained over three million people from all walks of life since its debut in 1937.

Presented by PNC Bank, several special events have been planned for the 80th Anniversary to include pre-show talkbacks with Director, Ira David Wood, III, Production Designer, William Ivey Long and other artistic staff. There will be an Alumni Reunion during the first weekend of July with a special Anniversary Celebration at the show on Saturday July 1. This season’s production is under the direction of Ira David Wood, III who is returning for his fifth season as Director. Other returning members of the artistic staff include: William Ivey Long as Production Designer, Robert Midgette as Fight Director, Joshua Allen as Lighting Designer, McCrae Hardy as Music Director, and Pam Atha as Choreographer.

About The Lost Colony
First staged in 1937, The Lost Colony (a 501-c3 non-profit) is the nation’s premier and longest-running outdoor symphonic drama. Written by Pulitzer Prize-winning playwright Paul Green, The Lost Colony’s 80th anniversary season plays May 26, 2017 to August 20, 2017 at Manteo’s Waterside Theatre, on North Carolina’s Outer Banks. Curtain time is 7:45 pm. For tickets and information, go to http://www.thelostcolony.org or call (252) 473-6000.