K.T. Clown’s New Book “Without Amen” Is A Unique And Provocative Look A Life, Politics And Religion Through The Eyes Of A Clown

Recent release “Without Amen” from Page Publishing author K.T. Clown is both intriguing and expressive; this work explores our countries history and present day through an explicit and opinionated narration. 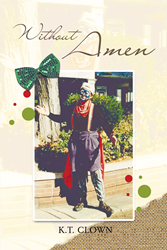 K.T. Clown, an entertainer, Christian, entrepreneur, social activist, devoted writer and author, has completed his new book “Without Amen”: an honest and telling work that opens the readers’ eyes to an interesting perspective. Sometimes viewing the world through someone else’s eyes makes all the difference; read along and learn about life and religion from Kissy.

Published by New York City-based Page Publishing, K.T. Clown’s unique book aims to push the reader to form an idea, an outlook and think for themselves.

May fourth of this year marked the forty sixth anniversary of the Kent State Massacre. On May 4, 1970 four students were shot and killed and eight were wounded by the Ohio National Guard. The students were demonstrating against the expansion of the Viet Nam war in Cambodia. The Guardsman were under orders to take cover and return fire from the unarmed students. The guardsman said there was a sniper and the students said there wasn't one. So, after a full minute volley of rifle fire, four unarmed students lied dead in their own blood. Yet there, to my knowledge, was no mention of that anniversary on any media. How on God's Green Earth are we supposed to learn from our history if we aren't aware of it. Kissy remembers because he wants to. He believes that where we are going should be in the shadow of where we have been. Kissy doesn't think we should be told how to think. “Without Amen” is an honest approach to life through the eyes of a clown. Where this country has been and where Kissy has been. His views are not lite reading and usually not politically correct. His insight into Family, friends and his faith in God are offensive to some and important to others. I have learned much from Kissy's unique approach of life. Readers might agree with him or they might not. He just hopes they will be less afraid to think outside of the box.

Readers who wish to experience this profound work can purchase “Without Amen” at bookstores everywhere, or online at the Apple iTunes store, Amazon, Google Play or Barnes and Noble.