Up one spot from 2017, Window Nation's accelerated growth is once again recognized by the industry. 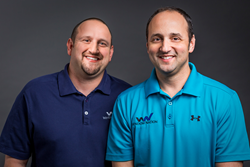 "This continued growth is a testament to the hard work of everyone on our team, meeting the needs of homeowners every single day," Harley Magden, Window Nation CEO

Window Nation is excited to announce their #5 ranking of replacement contractors in the 2017 Remodeling 550. The list, compiled by Remodeling Magazine, is ranked based on 2016 remodeling revenue of more than 87,000 home remodeling companies in the U.S. compiled via online surveys, emails, phone calls, and public sources. Of companies ranging in the top 10, only Window Nation also claimed a GuildQuality award for customer service and membership in the Big50.

“Over the last three years we’ve gone from 9th to 6th to now 5th largest,” said CEO Harley Magden, who co-founded the company a decade ago with his brother, Aaron. “This continued growth is a testament to the hard work of everyone on our team, meeting the needs of homeowners every single day.”

The company has offices across the Mid-Atlantic and Northeast Ohio, including Baltimore, Washington, Philadelphia, and Cleveland. Most recently, Window Nation expanded into the Pittsburgh area, which has only added to their tremendous revenue numbers.

“The best part about this ranking is that we’re doing it the right way,” said President and Co-founder, Aaron Magden. “Being able to be a top 5 remodeler who’s also earned a GuildQuality Service Excellence Award recognizes Window Nation for not just sales, but also great customer service throughout the entire sales process. Creating satisfied homeowners is always our main goal.”

For the full list, please visit http://www.remodeling.hw.net or pick up the May issue of Remodeling Magazine.

About Window Nation: Window Nation was started in 2006 by two brothers who grew up in the window business- learning about home improvement, customer care, and the difference a quality window can make. The company provides an unsurpassed selection of premium windows, siding, and doors installed by highly skilled, licensed professionals. The company has replaced over 350,000 windows in Northeast Ohio, Pennsylvania, Northern Delaware, Southern New Jersey, Maryland, Washington D.C., and Northern Virginia. Learn more at http://www.windownation.com.