Known simply as “The Barn,” a guest house near Jackson Hole, Wyoming, with interiors by WRJ Design and architecture by Carney Logan Burke, has been featured in multiple media outlets. Incorporating multiple uses, the innovative guest barn has gained online following charmed by its country-meets-contemporary design. 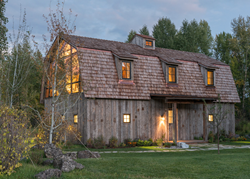 Everything inside is clean and modern, with these killer floor-to-ceiling mountain views.

Beautifully combining rustic elements with a luxurious, modern aesthetic is nothing new for WRJ Design, the award-winning interior design firm headquartered in Jackson Hole, Wyoming. WRJ is known for the elegant comfort of its residential interiors, equally at home in 10,000-square-foot main houses and darling guest cottages – like the guest barn they collaborated on in Wilson, Wyoming, with architects Carney Logan Burke.

Relatively small in stature, the project simply known as “The Barn” has formed a big following on a variety of media charmed by the structure’s homage to 19th-century working barns, as well as its lessons on blending country and contemporary with transcendent results.

The guest barn’s interiors and architecture evoke the element of surprise. Touting the project as “barn chic,” BigLife magazine quotes the homeowner as saying, “When you drive into the driveway, you think, what a beautiful rustic barn, and you expect everything inside to be cozy and a little old fashioned. But then you walk in and think “Wow! Everything inside is clean and modern, with these killer floor-to-ceiling mountain views.’”

Country Living follows suit, calling the home an “idyllic Wyoming guest house” and commenting on the “surprisingly modern” interior for the classic shape. The national all-things-housing website Curbed.com showcases the project with the line “not your typical farm shed,” and the lifestyle website Inside Hook jokes, “Does your barn have a classic car garage? Thought so.” – referencing the included garage for storing vintage vehicles. The Barn also graced the cover of Modern in Denver magazine and is featured as a standout home in hiconsumption, as well as popular The Scout Guide Jackson Hole, where WRJ owner Rush Jenkins talks about the dialogue of material and line between interior choices and architectural details.

The peaceful guest home rests in the small Jackson Hole-area mountain town of Wilson, whose population consists of roughly 1,600 people. The homeowners had always admired barns and started with photos of favorite weathered structures. At the same time, they enjoyed previous work with WRJ Design and the serene sophistication of the resulting interiors in their Jackson and California homes. Finally, they tasked architects and designers with incorporating comfy guest digs, a home workout space and the collectors’ garage in a guest house with straight-off-the-farm appeal.

“We wanted the interiors to reflect a contemporary aesthetic that would complement the clean lines of the barn’s architecture,” says WRJ Design’s Jenkins. “The bed, as an example, plays off the architectural angles and steel material of the windows and trusses while creating a very modern, floating feeling. And the luxuriousness of the interior contrasts with the structure’s original rustic barn wood to provide a sense of relaxation and contemplation for the homeowners.”

Recently named Best Mountain Designer by Rhapsody Magazine and awarded the 2016 Home of the Year award by Mountain Living magazine, WRJ Design is known regionally and nationally for its textured contemporary high-alpine designs that incorporate the natural beauty of the West with the history and artisanal traditions of internationally sourced materials.

About WRJ Design:
Headquartered in Jackson, Wyoming, WRJ Design imparts the special serenity of its local Teton landscape to interior designs in Jackson Hole and across the country. Begun out of a passion for great design by Rush Jenkins and Klaus Baer, WRJ creates experiences and environments through its designs that provide timeless reflections of homeowners and their collections. WRJ is also known for exhibition designs that offer insight into the lives of luminaries as they showcase the objects they loved. Winner of the 2016 Home of the Year from Mountain Living magazine, WRJ Design also creates the blog Hunt X Gather, named one of the Top 100 Interior Design Blogs on the web. For more information visit http://www.wrjdesign.com.

Rush Jenkins of WRJ Design created interiors that would complement the clean lines and rustic materials of the barn’s architecture as seen in the bedroom (photo by Audrey Hall).

WRJ Design used modern furnishings for the Jackson Hole guest barn such as the canopy bed by Poltrano Frau and a Ralph Lauren daybed and pillows of Loro Piana fabric (photo by Audrey Hall).

The ground floor garage of the guest barn features a graphic checkerboard tile floor and customized storage for the homeowners’ vintage cars and road bicycles (photo by Audrey Hall).