The unveiling of the Kneeling Soldier statue in Brewster, Minnesota, will be one you will not want to miss. The city is dedicating a beautifully symbolic memorial to all the Veterans that have served to protect this country and who have lost their lives in the service and honor of maintaining our freedom. 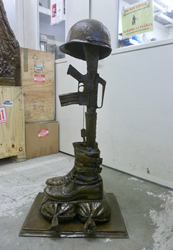 Through the creation of a beautiful bronze memorial, the men and women of the military can be honored and remembered forever.

At the entrance to the Brewster Veterans Memorial, you will see scale models of the World Trade Center twin towers that were destroyed in the attack, killing 2,606 people. They will be inscribed with a dedication and facts so America never forgets. Beyond the towers is the walk of honor, with black pavers in groups of 34 to honor the 34th Division “Red Bulls” of the Minnesota Army National Guard. Down the sand colored sidewalk in the walk of honor will be boot imprints, signifying a Soldier’s last steps.

At the end of the walk of honor is a pentagon shaped monument, to honor the attack on the Pentagon where 125 workers perished; inscribed with the five branches of the service. Surrounding the pentagon will be benches, so people can sit and reflect. The grasses and flowers around the flags are there to honor the brave members of United Airlines Flight 93, which crashed in a meadow near Shanksville, Pennsylvania killing 40 Americans. The United States lost 2,977 victims in the attacks, the deadliest foreign attack on American soil since the Japanese surprise attack on Pearl Harbor on December 7th, 1941.

On top of the monument is a custom bronze sculpture of Sergeant Kyle Miller, who died in Iraq on June 29th, 2006 while serving with the 1-125th Field Artillery Battalion, 34th Division from southwest Minnesota. The custom bronze battlefield cross is a composite to honor several wars; paratrooper boots from World War II, a bayonet from the Cold War, an M-16 from the Vietnam war, and a steel helmet from the Korean War.

All of these custom bronze sculptures were created by Utah based Big Statues. They have been known to have quite an extensive track record of creating Veteran memorials of all sorts, whether that be for individual businesses and owners or the U.S. Army itself. Big Statues takes on such projects because they want to give back and return the service in the ways that they can. To give back to the men and women in the armed forces that do so much for this country and give their lives to protect this land. Through the creation of a beautiful bronze memorial, the men and women of the military can be honored and remembered forever.'

The unveiling of the Kneeling Soldier is expected to take place near the end of this month. For more information on this memorial and the status of the unveiling, please click here.