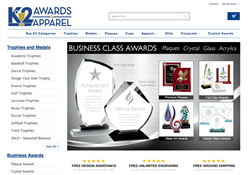 K2 Awards & Apparel is an online only custom trophy, award, and apparel retailer who was recently announced the "Best Retailer Website" winner by The Awards & Personalization Association.

As an online-only trophy and awards retailer, being named the ‘Best Retail Website of the Year’ by the industry’s most prestigious association is not only exciting but also an absolute honor.

K2 Awards & Apparel, an online retailer specializing in custom trophies, awards, plaques, and apparel, was announced the winner of the Best Retailer Website Contest by the Awards and Personalization Association in this month’s Insight’s magazine. K2 Awards’ website, https://www.k2awards.com, drew acclaim for its ease of use, overall visual appeal, and clear category structure. K2 Awards & Apparel won out of a field of entries from association members at the International Expo held in Las Vegas and votes from a select committee.

“We are delighted to be recognized for the hard work and innovation we have put into our website,” said Charlie Moss, President of K2 Awards & Apparel. “As an online-only trophy and awards retailer, being named the ‘Best Retail Website of the Year’ by the industry’s most prestigious association is not only exciting but also an absolute honor,” said Moss.

K2 Awards & Apparel, which is celebrating its 15th year in 2017, started as a small eCommerce website that only featured around 100 trophies and an operation run out of a garage. “We wanted to turn the trophy buying process on its head when we started K2 Awards,” said Moss, “Before our website came along, ordering a custom trophy required multiple trips to the local award shop. The goal of our website has always been to allow anyone to purchase whatever award they need from their home or office at a low price and receive it quickly.” Since its beginning in 2002, the company’s website and offerings have continually evolved to meet the award and personalization needs of its users, including the addition of custom apparel products and a tool that allows users to design and preview their trophy online.

“We have very exciting things on the horizon for our website in the coming year and hope to be a contender in this contest for years to come,” said Moss.