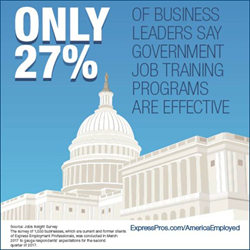 In a survey of 1,030 businesses, respondents were asked, “How effective are government job training programs?”

A majority, 56 percent, said programs are “neither effective nor ineffective,” while 14 percent called them “ineffective,” and 3 percent deemed them “very ineffective.”

While the number of respondents calling them effective is low, it is the highest percentage of respondents offering a positive view of government job training programs in the last four quarterly surveys from Express.

Full results are below.

“One of the biggest problems employers face in a tightening labor market is finding the right people with the right skills, and one of the biggest challenges for the unemployed is finding a job that matches their skill set,” said Bob Funk, CEO of Express, and a former chairman of the Federal Reserve Bank of Kansas City. “Results like these should be a wakeup call. We need job training programs that are effective at equipping people with skills that are in-demand, yet from businesses’ perspective, that’s not happening.”

The survey of 1,030 businesses, which are current and former clients of Express Employment Professionals, was conducted in March 2017 to gauge respondents’ expectations for the second quarter of 2017. Previous surveys were conducted to cover hiring trends of the quarters indicated.