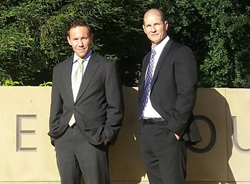 Charles Tony Piccuta and associate standing in front of the United States District Court for the Eastern District of California after the verdict.

The inmate claimed that the guards watched the assault, failed to ring the alarm to stop it and then failed to get him medical care after his leg was fractured in three places.

On May 18, 2017, a jury unanimously found that California prison guards entered a conspiracy to have an inmate assaulted for filing a prison grievance against them. The inmate filed a civil complaint against both prison guards claiming that the guards asked other inmates to assault him when he was housed in Kern Valley State Prison. In the complaint, the inmate claimed that the guards watched the assault, failed to ring the alarm to stop it and then failed to get him medical care after his leg was fractured in three places.

According to the trial transcript, the inmate testified that his bone was sticking through his skin and that his leg was bleeding. He further testified that he had to hop over 300 yards to a prison medical clinic because the guards refused to request medical help. Evidence at trial showed that the inmate required multiple surgeries with hardware to reconstruct his broken leg. According to the trial transcript, the guards claimed that the inmate had told them he slipped and fell and requested to go to medical. The guards further claimed that when the inmate left to receive medical treatment he did not appear in any apparent distress and was walking normally, just slower than usual.

The case was tried in the United States District Court for the Eastern District of California and entitled Kevin Darnell Bryant v. Patrick Gallagher, Et Al. (1:11-CV-00446). The case was before the Honorable Barbara A. McAuliffe and Defended by the California Attorney General’s Office. According to the court docket, the case was filed in 2010 and took seven years to get to trial.

The inmate was represented by personal injury attorney Charles Tony Piccuta from the Piccuta Law Group, LLP. Prior to finding Piccuta, the inmate had contacted over 140 other attorneys and multiple civil rights and prison legal help groups. None of them wanted to take on the case. Piccuta agreed to take the case in October of 2016 just three weeks before the case was originally scheduled for trial. The Piccuta Law Group has offices in Monterey and San Jose, California and Scottsdale, Arizona.