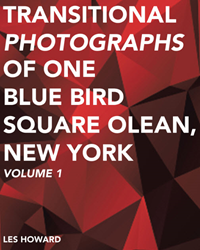 NEW YORK (May 29, 2017) – A New York-based photographer has released a book detailing the construction process of a New York building. “Transitional Photographs of One Blue Bird Square Olean, New York,” by author Les Howard, captures the building of Blue Bird Bus Company from start to finish.

‘Transitional Photographs’ is comprised of nearly 800 photos which capture the process of Blue Bird Bus Company’s headquarters in Olean, N.Y. Howard shot more than 2,500 photographs during the construction process of the building – from the pouring of the initial concrete to the grand opening.

Howard has had an interest in telling stories by way of photograph for years, telling a story from start to finish strictly through photography. He studied at the New York Institute of Photography where his first serious photography project came to fruition. Howard took several black and white photos of the Sound Factory, a popular coffee house in New York, being dismantled – it was this project that kicked his passion into high gear.

For Howard, this is a personal feat in which he is quite proud to have accomplished. “Pursuing the completion of this book was part of my bucket list,” said Howard. “I am proud of the work I’ve done and I hope people enjoy these pictures.”

To learn more about “Transitional Photographs of One Blue Bird Square Olean, New York” and the author, please visit his website.

About the author
Les Howard is a graduate of the New York Institute of Photography.