Lifesaving assistance to tens of millions of people could be cut 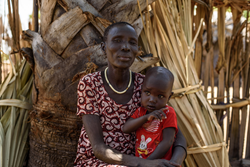 It is shortsighted for the administration to propose gutting development programs in order to save taxpayer dollars, when these very programs are breaking the cycle of hunger, violence and poverty and decreasing reliance on aid dependence in the long term.

The global organization Mercy Corps urges Congress to reject significant cuts to foreign assistance in the administration’s FY18 budget request. The budget proposes the complete elimination of Food for Peace (FFP) Title II and slashes humanitarian funding for the Office of Foreign Disaster Assistance (OFDA) nearly in half. If enacted, cuts to FFP would result in more than 30 million people not receiving food aid, and cuts to OFDA could jeopardize humanitarian aid to tens of millions of vulnerable people.

“It would be absolutely shameful to cut foreign aid at a time when four countries are experiencing or are on the brink of famine and we are facing the greatest humanitarian need since World War II,” says Andrea Koppel, Vice President of Global Engagement and Policy at Mercy Corps. “Cuts will completely undermine U.S. leadership and standing in the world – not to mention global security and stability – and potentially wipe out decades of progress.”

The proposed zeroing out of Development Food Aid Programs (DFAPs) comes at a time when food security programs are needed most. For the first time in six years famine has been declared and 20 million people face starvation in four countries. Some 795 million people are undernourished, and DFAPs are critical to building long-term food security and lifting people out of poverty. Each year DFAPs help address the underlying drivers of chronic hunger for approximately 7.5 million people.

“It is shortsighted for the administration to propose gutting development programs in order to save taxpayer dollars, when these very programs are breaking the cycle of hunger, violence and poverty and decreasing reliance on aid dependence in the long term,” says Koppel. “If Congress does not act and restore funding for the International Affairs Budget to $60 billion, we will be forever stuck in a perpetual cycle of humanitarian and military intervention while never solving the conflicts fueling today’s massive humanitarian crises. Cutting conflict-prevention programs is a huge step backward in our efforts to make America – and the world – safer.”

With support from partners including the United States government, Mercy Corps helps 30 million people in more than 40 countries survive through crisis, build better lives and transform their communities for good. Join us and support our work.