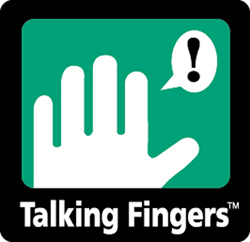 Speech-to-print instruction for early reading is not a new idea in the world of teaching children. Maria Montessori was using this approach many years ago. But it took neuroscience to prove her right. Enter Jeannine Herron, Ph.D.

In seven new iPad apps called "Talking Shapes", children in preschool and kindergarten learn that letters are “talking shapes” that stand for speech sounds. Parents can launch their children on the path to becoming lifetime writers and readers by teaching them that the words they already know how to say can be turned into words they see!

Noted neuropsychologist, Dr. Jeannine Herron, has applied the most recent research on how young brains learn to create wonderfully interactive stories about how two sisters invented the alphabet “long, long ago”. Letters are embedded in pictures that help children remember both the sound and shape of each letter.

Talking Shapes has been developed through a research grant from the National Institute of Child Health and Human Development (NICHD). “Jeannine is one of the few scientists who can translate complex research findings into effective instructional solutions for kids,” says G. Reid Lyon, Ph.D., former Chief of the Child Development and Behavior Branch within the NICHD. Independent research has shown significant improvement in preschoolers’ skills after using Talking Shapes.

“Struggling readers,” according to Dr. Herron, “activate their right brains to read, but skilled readers use the left brain. By speaking the words first and sounding them out, children activate and build pathways in the left-brain, where new, crucial
links to visual words need to take place.”

“If Ellie is like your kiddos, this program is a hit,” says mom, Christie B. “It is not dull and repetitive like some phonics programs. It’s a screen – she likes it. I have to put time limits on or she would sit at it all day, even when it gets too hard. Essentially, she begs to do her lessons. Okay, fine, you can learn, Ellie.”

In seven interactive stories children are gradually introduced all 40 speech sounds (phonemes) in English and the letters that stand for those sounds. Each story adds six new phonemes to the list and is accompanied by games that help children sound-out and build three-letter words, drawing the letters as they play. A reading game helps them decode and recognize the words they have spelled.

Talking Shapes can be used as a sequence of seven independent apps on any tablet, or as an integrated supplementary curriculum (accessed via the internet on a computer) that also keeps track of each student's progress and takes them automatically to the next activity. This tracking makes it easy for children to find their place in the program at a station in the classroom or at the kitchen table with adult supervision.

Codes to download apps are available for reviewers, please call or email.

Jeannine Herron has been helping to teach the world to read for over 50 years. She is a research neuropsychologist who became interested in reading-related research in 1965 when she was co-founder and program director of the first Head-Start program in the country—the Child Development Group of Mississippi, serving 5,000 children. She received
her Ph.D. from Tulane Medical School, and went on to do extensive neuroscience research in brain organization and dyslexia at the University of California San Francisco.  She has published peer-reviewed papers in several scientific journals and a feature article in Psychology Today.  She has been a contributing editor for Science and also Brain and Language, has lectured widely and has given many in-service workshops for teachers.

Since 1994, Dr. Herron and her colleagues at Talking Fingers Inc. have designed, developed, and researched early reading and spelling software (Read, Write & Type! and Wordy Qwerty) with three grants from the National Institute of Child Health and Human Development (NICHD). Voice-over help in several languages makes Read, Write & Type an easily accessed online product for learning English literacy. Another grant from NICHD funded a collaboration on a product called Smart Cycle, licensed to Fisher-Price, which became their "Toy of the Year" in 2008.

In her 2012 book, Making Speech Visible: How Constructing Words Can Help Children Organize Their Brains for Skillful Reading, Dr. Herron uses the latest in brain-imaging research, case studies and simple tips to lead educators and parents alike to a more effective way of starting children on the path to skilled reading. Making Speech Visible,
Read, Write & Type and Wordy Qwerty are all available at: http://talkingfingers.com