"The Spectacle - Celebrating the History of the Indianapolis 500" arrives just in time to educate & entertain kids about the amazing legacy of "The Greatest Spectacle in Racing" this summer. 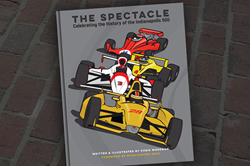 “For young students and race fans who are taking an interest in the history of the Indianapolis 500 and would like to learn more, this book will answer A LOT of their questions.” - Indianapolis Motor Speedway Historian Donald Davidson

For many kids, finding a topic that is interesting to them is an important motivator for wanting to read. This is especially true during the summer months when the allure of playing outside and other activities are the goal and reading is “just school work.” Apex Legends’ recently released “The Spectacle – Celebrating the History of the Indianapolis 500,” an Indianapolis 500-themed children’s book which helps offer a solution that is perfectly suited to inspire kids who love cars and racing.

“The Spectacle – Celebrating the History of the Indianapolis 500” presents a century’s worth of information to kids in a format that is both educational and entertaining. Although the book is non-fiction, a dialogue between a father and his kids is used to take readers on a journey through the evolution of “Greatest Spectacle in Racing” from the first event in 1911 to today.

Readers see and learn how the Indianapolis Motor Speedway and the amazing cars that have raced at “The Brickyard” have changed over the years. ”The Spectacle” provides a snapshot of some of the most dramatic moments in race history and the men and women involved in the on-track action. Vibrant hand-drawn illustrations help bring the descriptions to life.

Of course, the challenge was sorting through decades of excitement and packaging it in a manner suitable for kids. “The Indy 500 is so full of rich history and tradition that it was difficult to break it all down in a way that kids could easily follow along and see how the event has evolved,” said Chris Workman, Apex Legends’ founder and author / illustrator of the book.

“I decided to lay out the information in a series of short sections devoted to topics like four-time winners and closest finishes; the dialogue between the father and his kids is used to lighten the tone. Readers can enjoy the book cover-to-cover or simply jump into any section they want to learn about,” added Workman.

The result? This approach allows “The Spectacle – Celebrating the History of the Indianapolis 500” to serve a dual role as a fun summer read and also a quick reference guide for any elementary age student who wants to do a report on the history of the Indy 500 next fall. Indianapolis Motor Speedway Historian Donald Davidson agrees, stating “For young students and race fans who are taking an interest in the history of the Indianapolis 500 and would like to learn more, this book will answer A LOT of their questions.” Odds are that many adults – even those who have been fans of the Verizon IndyCar Series and the Indy 500 for some time – will likely learn something new from this book as well.

“Passing the legacy of drivers like A.J. Foyt, Louis Meyer and Rick Mears on to the next generation is extremely important; being able to be involved in the process has been phenomenal,” said Workman. “In addition to providing some motivation to kids to read, I hope that this book inspires kids – and their parents - to want to see the Indy 500 for themselves and check out the awesome racing cars featured in ‘The Spectacle’ that are on display at Hall of Fame museum at the track.”

The hardcover book is available through apexlegends.com, Amazon, Barnes & Noble, Books-A-Million, Target.com and other independent retailers & libraries. Or, race fans can pick up a copy at the Indianapolis Motor Speedway museum and Verizon IndyCar Series official fan merchandise display. A coloring book featuring a simplified version of the text is also available at the track and the Apex Legends web site. A portion of proceeds support Racing for Cancer; 2014 Indy 500 race winner Ryan Hunter-Reay wrote the Foreword to the book.