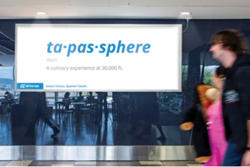 “What we really wanted was that when people thought ‘I want to travel to Spain,’ the first thing they thought of was Air Europa,” says DeMontpellier.

Paul DeMontpellier has never been to Europe.

That will change this fall after he and a group of classmates won a free round-trip plane ticket to Spain thanks to Air Europa, a Spanish-based airliner with U.S. offices in Miami and New York.

DeMontpellier, a graduate student in FIU’s Global Strategic Communications’ creative track, took part in a course during the Spring 2017 semester where students from two of Professor Grizelle De Los Reyes’ classes combined their skills and knowledge to craft a full-fledged communications campaign for Air Europa.

After completing a summer internship at an ad agency and graduating with a master’s degree, DeMontpellier plans to use the ticket for a two-week trip to Spain, exploring some of the country’s major cities such as Madrid and Barcelona and perhaps visiting some family members who live in neighboring France.

“It’s really exciting,” DeMontpellier says. “Having the incentive of the trip to Spain really pushed us and the other groups to put it on the line, to put pressure on us to really push our execution and ideas further and to come together.”

The project provided a unique opportunity for students to create strategies, tactics and creative ideas to a real client and helped FIU show its willingness to work with corporations and employers with connections to South Florida.

And for Air Europa, which has had offices in Miami for the last three years, it gave the company a chance to build vital relationships within the community.

“One of Air Europa’s objectives in this exciting phase of establishing a strong presence in this market, is integrating our brand to local institutions,” says Jorge Alberto Fuentes, Air Europa’s vice president of sales and marketing. “The collaboration with FIU is of vital importance to our interests and business objectives.”

Each student held a specific role that would mimic the actual positions at a real ad agency tasked with creating communications campaigns for clients, including an account planner, media director, art director and a copywriter.

“Any time you can simulate what it would be like in an actual agency as close as possible where you have every element of a team that would create something like this, it is really beneficial,” DeMontpellier says.

One of the main objectives: to connect with a new target audience, particularly millennials, in a memorable and relevant way.

“I like to be very real and work with students to find immediate applications that are going to work in the real world,” De Los Reyes says of her teaching approach. “It’s the best way to teach.”

Over the course of the 16-week semester, the group had a briefing with a representative from Air Europa to learn about their objectives; did secondary research to learn more about the Air Europa brand and trends in the airline industry; developed, designed and conducted surveys, focus groups and interviews to gather consumer insight; and, finally, putting together a creative strategy based on their findings.

At the end of the semester, each group pitched their ideas to a panel of judges that included a representative from Air Europa, industry professionals and FIU faculty – including Executive Director of Career and Talent Development Fernando Figueredo and Department of Communication Chair Maria Elena Villar.

The panel chose the winning group that evening, whose members would receive that free trip to Spain.

In the end, it was DeMontpellier and his teammates that emerged as the winning group. Their campaign included a proposal for a clever marketing strategy that spanned across multiple platforms, combining Air Europa’s benefits and offerings with its Spanish heritage.

The strategy featured colorful wordplay, mixing Spanish words with airline terminology to create new terms such as “Skyesta” (a combination of sky and siesta) and “Tapasphere” (tapas and atmosphere) to play up the airline’s Spanish culture.

“What we really wanted was that when people thought ‘I want to travel to Spain,’ the first thing they thought of was Air Europa,” says DeMontpellier, who was the group’s copywriter.

The quality of the presentations and the ideas that came from the students impressed the panel of judges and it is not inconceivable to see Air Europa perhaps use some of the ideas presented in a real campaign.

“The effort put forth by each student team was not only commendable, but has the potential of being developed and woven into our corporate plans and ideas,” Fuentes says. “We look forward to more of these collaborations and strengthening the ties between our two institutions.”