“Noah And The Tie That Binds” from Christian Faith Publishing author James Dowell goes beyond the Scripture to tell the rest of Noah’s story. The time of Noah may seem very different from the modern world, but the two ways of life have much in common. 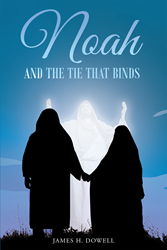 “Noah And The Tie That Binds”: a tale of Noah that reveals how little has changed since his time. “Noah And The Tie That Binds” is the creation of published author, James Dowell. James H. Dowell was born and raised in a small town in the middle of the United States. Church played a large role in James’s life growing up as well as his family. James hopes to take some of the Bible stories that he was taught as a young boy and develop characters to entertain and help others better understand the significance of Biblical figures. He wants to bring the stories and characters to life for others.

“Have you ever wondered what that time may have been like? What could have caused the Lord to grieve in his heart and to destroy the world he had created? How! How can any family go through an ordeal like that? We all know the answer, that is, at least we do on the surface. It is only by walking closely with the Lord.” --James Dowell

In the Book of Genesis, the Lord tells the story of Noah, a righteous man who walked with God. For those who want to explore the possibilities and pry open the lives between the verses, author James Dowell invites readers to explore this story based on the life of Noah. By telling the untold story, “Noah And The Tie That Binds” shows readers how little life has changed over time.

Learn more about the walk Noah had with God and how all the lives of God’s children are bound to Him in faith, hope, and love throughout all time. Learn how the world of Noah’s time was not really that much different from modern life. People worked in their fields and the cities while selling, buying, and making plans for the future. Like today, it was also a time of apostasy with men partaking in excess and forsaking God.

View a synopsis of “Noah And The Tie That Binds” on YouTube.

Consumers can purchase“Noah And The Tie That Binds” at traditional brick & mortar bookstores, or online at Amazon.com, Apple iTunes store, Kobo or Barnes and Noble.

For additional information or inquiries about “Noah And The Tie That Binds”, contact the Christian Faith Publishing media department at 866-554-0919.