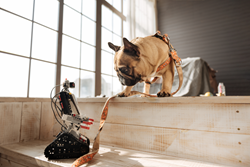 Yeah, sure I’d have an AI dog. He could take himself for a walk and if he got run over it wouldn’t really matter that much. MALE Millennial (22-37)

The research study undertaken independently by FlexMR examines the behaviour, perceptions and aspirations of the British public with regards to artificial intelligence as a whole, by gender and generation. The study found that 37% of UK dog owners and 39% of UK cat owners would like to own an ‘AI’ dog or cat if it were able to emulate their living companions’ behaviour in all but basic biological necessity; eating, exercising and sanitising.

FlexMR CEO, Paul Hudson stated, “In a nation of animal lovers the percentage of pet owners who see themselves with an AI pet may appear surprising... But in a world where convenience is everything, it was perhaps inevitable.”

A marked percentage of the population also aspire to an AI physical assistant, with 70% willing to put their trust in such a robot to carry out routine tasks, i.e. cleaning, taking the rubbish, making the bed. This is strongly countered however by a lack of faith in an AI to take over more complex human roles. Tasks which require academic, social, and emotional intelligence, i.e. surgical procedures, clothes shopping and babysitting will remain in the human domain for the foreseeable future with only 14%, 9% and 4% respectively prepared to commit these to an AI.

A political outtake, 23% of Brits claim that they would trust an AI to run the country over and above Teresa May, 27% over and above Jeremy Corbyn. One respondent referenced David Bowie’s, Saviour Machine. Whilst these statistics are clearly a projection of the UK’s current political dissatisfaction rather than a call to AI action there is also an argument here as regards to the benefits of AI in its current state. Not yet able to imitate human emotion or full cognition, AI is perceived publicly as a ‘counter-human intelligence.’

“What was apparent from the AI political questioning was the UK’s desperation for some long awaited political stability. The resounding sentiment, ‘at least a machine can be programmed.’ Whilst we are not going to see an AI Prime Minister any time soon let’s hope the upcoming general election result brings with it some cohesion, nationally at least,” said Hudson.

On the employment front, Brits admit to fearing for their jobs in the wake of recent artificial intelligence developments. Over 1/3 of the UK population fear that they will be replaced by an AI in the workplace and over 1/2 of those consider that it will happen within the next 10 years. The younger generations, Gen Z (7-21 years old) and the Millennials (22-37 years old) demonstrate the most concern where Baby Boomers (53-71 years old) feel relatively secure, likely due to their time remaining in the workforce.

An overarching theme spanning the study as a whole was the AI interest demonstrated by the younger generations. Whether they see it as a threat or an opportunity, Gen Z and the Millennials are most open to the concept. It should be noted however that Gen Z are not as enamoured with AI’s existing consumer offering as Millennials.

“Millennials it seems can still be wowed by Alexa’s soothing tones. With their superior technological expectations however Gen Z are slightly more apathetic. Providers need to up their game to win favour in this market segment,” Hudson concluded.

This report is based on the combined qual and quant study of 1,013 UK participants representative of the UK population in terms of generation and gender.

Additional findings from this research study can be found on the FlexMR blog: The Impact of Artificial Intelligence on Consumer Behaviour: Topline Research Results

Or to request the full research report please contact:

FlexMR is a UK based international market research software and service provider. Founded in 1990 they provide a full spectrum of qual, quant, community, panel, desktop and mobile online research tools all fully integrated into one simple interface.

The FlexMR business model puts the client in control with flexible payment plans and provides optional collaboration with FlexMR’s expert team of researchers.