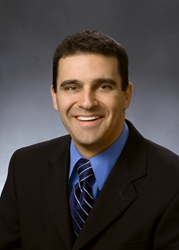 I am confident that the initiative and tenacity [Dan Franklin] has shown in developing commercial real estate loans will be successfully applied to growing our commercial banking portfolio and building a strong team of bankers in the Bay Area.

River City Bank has promoted Dan Franklin to Senior Vice President, Bay Area Commercial Banking Director. In his new role, Franklin joins the senior leadership team of the Bank and will oversee the continuation of its multi-year expansion into the Bay Area. A South Bay native, Franklin joined River City Bank in 2008 and has been instrumental in the Bank establishing a strong foothold in the Bay Area market.

“As a key member of our commercial real estate business development team, Dan has been a significant contributor to the Bank’s stellar growth over the past five years,” said Steve Fleming, President and CEO of River City Bank. “I am confident that the initiative and tenacity he has shown in developing commercial real estate loans will be successfully applied to growing our commercial banking portfolio and building a strong team of bankers in the Bay Area.”

“Paving the way for our expansion in the Bay Area has been a team effort, and it’s been a pleasure to see our reputation and reach grow over the past several years,” said Franklin. “Now, I look forward to building an exceptional team of commercial bankers that will accelerate our market penetration and further secure River City Bank as one of the strongest locally-owned business banks in Northern California.”

An alumnus of the Graduate School of Management at the University of California, Davis, and recipient of the Chartered Financial Analyst designation, Franklin lives with his wife and son in Danville. He operates out of River City Bank’s Commercial Banking office in Walnut Creek.