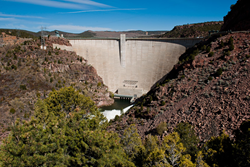 Reclamation’s infrastructure needs are also high in priority to keep dams safe for the public they serve.

President Donald Trump proposed a $1.097 billion Fiscal Year 2018 (FY18) budget for the Department of the Interior’s Bureau of Reclamation. The budget supports the Administration’s and Interior’s goals of ensuring the efficient generation of American energy, provision of secure water supplies, varied use of resources, celebration of America’s recreation opportunities and fulfilling commitments to tribal nations.

“President Trump promised the American people he would cut wasteful spending and make the government work for the taxpayer again, and that's exactly what this budget does,” said U.S. Secretary of the Interior Ryan Zinke. “Working carefully with the President, we identified areas where we could reduce spending and also areas for investment, such as addressing the maintenance backlog in our National Parks and increasing domestic energy production on federal lands. The budget also allows the Department to return to the traditional principles of multiple-use management to include both responsible natural resource development and conservation of special places. Being from the West, I've seen how years of bloated bureaucracy and D.C.-centric policies hurt our rural communities. The President's budget saves taxpayers by focusing program spending, shrinking bureaucracy, and empowering the front lines."

As the nation’s largest wholesale water supplier and second-largest producer of hydroelectric power, Reclamation’s projects and programs are an important driver of economic growth in the western States. Its mission is to manage, develop, and protect water and related resources in an environmentally and economically sound manner in the interest of the American public. Reclamation manages water for agricultural, municipal and industrial uses, and provides flood risk reduction and recreation for millions of people.

“President Trump’s budget for Reclamation shows his strong commitment to our mission of managing water and producing hydropower in the West,” Acting Commissioner Alan Mikkelsen said. “Reclamation’s infrastructure needs are also high in priority to keep dams safe for the public they serve.”

It emphasizes Reclamation's core mission of reliable water delivery and hydropower generation to address the water demands of a growing population in an environmentally responsible and cost-efficient manner; and to assist states, tribes and local entities in solving water resource issues. It also emphasizes the operation and maintenance of Reclamation facilities in a safe, efficient, economic and reliable manner — ensuring systems and safety measures are in place to protect the public and Reclamation facilities.

The FY18 budget will continue to support and emphasize activities designed to prevent and combat the infestation of quagga and zebra mussels across Reclamation states. These invasive species are rapidly reproducing and have infested multiple operational areas of Reclamation facilities, impacting pumping capabilities for power and water operations, blocking water intake structures and affecting the ecosystems by feeding off existing algae resulting in a shift in native species and a disruption of the ecological balance. Research is continuing to find ways to impede the quagga and zebra mussels’ populations. Increased funding in FY18 will support Reclamation mussels’ activities framework established in the Quagga–Zebra Mussel Action Plan (QZAP) for Western U.S. Waters. This work is being pursued in close cooperation with the Western Governors Association, and includes a focus on working with states and tribes to keep invasive mussels from infecting the Columbia River Basin in the Pacific Northwest.

Reclamation’s dams, water conveyances and power generating facilities are critical components of the Nation’s infrastructure. Effectively managing these structures is among the many significant challenges facing Reclamation over the next several years and beyond. Reclamation’s FY18 budget reflects a very deliberate approach to addressing mission priorities.

Tribal Nations – Within Water and Related Resources in FY18, Reclamation is requesting a total of $151.3 million to support tribal nations’ efforts and initiatives. To meet Interior’s trust and treaty obligations, Reclamation’s budget request sets Indian water rights settlements among the highest priorities. In FY18, $98.6 million is requested for the Indian water rights settlements authorized under several legislative statutes, including the Claims Resolution Act of 2010, the Omnibus Public Land Management Act of 2009 and the newly enacted Water Infrastructure Improvements for the Nation Act of 2016. This includes funding of $67.8 million for the Navajo-Gallup Water Supply Project, $12.8 million for the Crow Tribe Water Rights Settlement, $8.0 million for the Aamodt Litigation Settlement, and $10.0 million for the Blackfeet Water Rights Settlement. The funding for the Blackfeet Water Rights Settlement represents Reclamation’s first contribution towards meeting its required contribution of $246.5 million by January 2025. In addition to requesting funding consistent with current activity, these settlements will draw on available mandatory funding to continue project activities. In FY18, the discretionary funds are requested within Water and Related Resources, as opposed to a separate appropriations account as requested in prior years.

Other aspects of the FY18 budget proposal include:

Central Valley Project Restoration Fund – This fund was established by the Central Valley Project Improvement Act, Title XXXIV of P.L. 102-575, Oct. 30, 1992. The budget of $41.4 million is expected to be offset by discretionary receipts totaling $41.4 million, which is the maximum amount that can be collected from project beneficiaries under provisions of Section 3407(d) of the Act. The discretionary receipts are adjusted on an annual basis to maintain payments totaling $30 million (October 1992 price levels) on a three-year rolling average basis. The budget of $41.4 million for the CVPRF was developed after considering the effects of the San Joaquin River Restoration Settlement Act (P.L. 111-11, March 30, 2009) which redirects certain fees, estimated at $2 million in FY 2018, collected from the Friant Division water users to the San Joaquin Restoration Fund.

Dam Safety Program – The safety and reliability of Reclamation dams is one of Reclamation’s highest priorities. The Dam Safety Program is critical to effectively manage risks to the downstream public, property, project, and natural resources. The budget of $88.1 million for the Safety of Dams Evaluation and Modification Program provides for risk management activities at Reclamation’s high and significant hazard dams where loss of life or significant economic damage would likely occur if the dam were to fail. The budget also includes preconstruction and construction activities for several ongoing and planned Dam Safety modifications. In addition, funding is included in the budget for Interior’s Dam Safety Program, which Reclamation oversees.

Desalination and Water Purification Research Program – This program supports desalination research, development and demonstrations for the purpose of converting unusable waters into useable water supplies. The FY18 request of $2.9 million supports new and continued projects in the three funding areas: laboratory scale research studies, pilot-scale testing projects and full-scale testing projects. Funding also supports the operation and maintenance of Reclamation’s Brackish Groundwater National Desalination Research Facility, which supports testing of pilot-scale and full-scale testing projects, as well as potentially supporting work from Cooperative Research and Development Agreements that are in development, including one focused on produced waters from oil and gas extraction activities.

The Bureau of Reclamation, throughout the 17 western states, is committed to helping meet the many water and power challenges of the West. Reclamation’s water and hydropower projects and activities throughout the western United States are a foundation for essential and safe water supplies, providing renewable hydropower energy and sustaining ecosystems supporting fish and wildlife, recreation and rural economies.