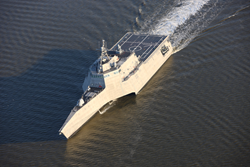 This milestone achievement involved the execution of intense comprehensive tests by the Austal-led industry team while underway, which demonstrated to the Navy the successful operation of the ship’s major systems and equipment. Acceptance trials are the last significant milestone before delivery of the ship, which is expected this summer.

“I am extremely proud to be a part of this talented team of men and women who achieved another major milestone in the LCS program,” commented Austal USA President Craig Perciavalle. “With the imminent delivery of LCS 12 and with Manchester (LCS 14) right behind her, scheduled for delivery later this year, Austal has achieved and maintained incredible momentum that positions us well into the future. We are excited that these ships are joining the fleet. It is very rewarding to see what USS Coronado (LCS 4) has done on her maiden deployment, demonstrating the capabilities and flexibility of these great ships and we are eager for Omaha to take her place in the fleet.”

The LCS program is at full rate production delivering two ships a year and is continuing its momentum at Austal USA with six ships currently under construction. Manchester (LCS 14) is preparing for trials and Tulsa (LCS 16) will begin trials at the end of the year. Final assembly is well underway on Charleston (LCS 18) and Cincinnati (LCS 20). Modules for Kansas City (LCS 22) are under construction in Austal’s module manufacturing facility and the first aluminium will be cut on Oakland (LCS 24) tomorrow.

Austal is a global defense prime contractor and a designer and manufacturer of defense and commercial ships. For more than 27 years Austal has been a leader in the design, construction and maintenance of revolutionary ships for governments, navies and ferry operators around the world. More than 255 vessels have been delivered in that time.

Defense vessels designed and built by Austal include multi-mission combatants, such as the Littoral Combat Ship (LCS) for the United States Navy and military high-speed vessels for transport and humanitarian relief, such as the Expeditionary Fast Transport (EPF) ships for the U.S. Navy and High Speed Support Vessel (HSSV) for the Royal Navy of Oman. Austal also designs, constructs, integrates and maintains an extensive range of patrol and auxiliary vessels for government agencies globally, including the Cape Class Patrol Boat program for Australian Border Force. Defense vessels are designed and constructed in Mobile, Alabama, and in Henderson, Western Australia.
Austal has been at the forefront of the high-speed ferry market since the early days of the industry. Our market leading designs of high performance aluminium vessels have long been at the heart of Austal’s research and development. Today, commercial ship construction is centred on our shipyard in Balamban, Philippines.

Austal has expertise in integrating complex systems into its ships, including ride control, ship management, and communication, sensors and weapon systems.

Austal provides a wide range of support services, including through life support, integrated logistics support, vessel sustainment and systems support. These services are delivered through our global support network in the USA, Australia, Asia, and the Middle East together with partner shipyards worldwide.