A Partnership for Character: Rumsfeld, Churchill and the Travis Manion Foundation

Rumsfeld, Churchill Give $500,000 to leading veterans group, the Travis Manion Foundation, to spotlight their work ahead of Memorial Day. 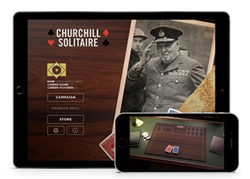 By engaging veterans & families of the fallen to emphasize the importance of character & service, the Travis Manion Foundation is carrying out work that is indispensable for future generations of America.

One year after the release of Churchill Solitaire, Donald Rumsfeld’s viral mobile app that brought to life the card game played by Sir Winston Churchill himself, the twice former Secretary of Defense announced that all of his profits from the app to date will be part of a $500,000 grant from the Rumsfeld Foundation to the Travis Manion Foundation.

Churchill Solitaire became the fifth most downloaded game in the world the week of its launch on January 16, and has gone onto be one of the most popular and challenging solitaire games on the App Store and GooglePlay with more than a million downloads across all platforms. Through the Rumsfeld Foundation, Rumsfeld is donating all of his profits from the game to nonprofits that support the men and women of the U.S. military and families of the fallen.

"By engaging veterans and the families of the fallen to go out into communities across the United States to emphasize the importance of character and service, the Travis Manion Foundation is carrying out work that is indispensable for future generations of America,” said Donald Rumsfeld. “Through the ‘Character Does Matter’ program, Ryan Manion and the Foundation her family started bearing the name of her fallen brother exemplifies the words First Lieutenant Travis Manion spoke before his last deployment: “If Not Me, Then Who…” Indeed, it is an echo of Churchill himself, who said, ‘Character may be manifested in the great moments, but it is made in the small ones.’ We are most fortunate to have great examples of character and leadership in our service members, veterans and their families. The efforts of the Travis Manion Foundation to advance the legacies of our nation’s fallen heroes is work that we are honored to support,” Rumsfeld added.

The Travis Manion Foundation’s mission is to empower veterans and the families of the fallen to develop character in future generations. The Foundation was established in honor of First Lieutenant Travis Manion (USMC) who was killed in Iraq in 2007 while saving his wounded teammates. Guided by the words Travis spoke before leaving for his final deployment, "If Not Me, Then Who..." the Travis Manion Foundation encourages veterans to continue their service to nation, to develop strong relationships with their communities, and to thrive in their post-military lives.

Their dedication to redefining America’s national character, is exemplified through the Character Does Matter program which the Rumsfeld Foundation has helped to support since 2013. The program engages veterans and families of fallen heroes to inspire young adults to live with character, develop their leadership skills, and activate them to serve their communities in honor of the fallen. Since its inception the program has reached nearly 200,000 young adults.

“TMF has been honored to partner with Rumsfeld Foundation for seven years now. Together, our aim has been to 'redefine America's national character,' and I can think of no better way to do that than to partner with likeminded people like Secretary Rumsfeld and the team at the Rumsfeld Foundation. This started as an effort to honor my brother's sacrifice and legacy, but thanks to amazing partners, it's become something much larger and much more profound. It's now about uniting an entire nation, and rallying around a message of character, leadership, and service--in this generation, and for generations to come,” said Ryan Manion, TMF President.

About Churchill Solitaire
Launched in January 2016 in partnership with Churchill Heritage Ltd. and digital agency, Javelin, CHURCHILL SOLITAIRE was developed based on a card game British Prime Minister Winston Churchill reportedly played throughout World War II. For more information on Churchill Solitaire, visit churchillsolitaire.com and download the game on your mobile device from the App Store for iPhone, iPad and iPod touch as well as Google Play.

About Travis Manion Foundation
Travis Manion Foundation (TMF) empowers veterans and families of fallen heroes to develop character in future generations. In 2007, 1stLt Travis Manion (USMC) was killed in Iraq while saving his wounded teammates. Today, Travis' legacy lives on in the words he spoke before leaving for his final deployment, "If Not Me, Then Who..." Guided by this mantra, veterans continue their service, develop strong relationships with their communities, and thrive in their post-military lives. As a result, communities prosper and the character of our nation’s heroes lives on in the next generation. Additional information about the Travis Manion Foundation can be found at http://www.travismanion.org.