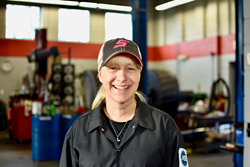 When camera- and sensor-equipped ‘connected cars’ talk to each other, they will be able to send messages... Your car will take control, reacting faster than you ever could. The technology could save your life."

Like it or not, anyone who buys a new car in the years ahead will be taking part in the autonomous-vehicle revolution, writes Janet Bigelow, co-owner of N.J.-based Advanced Tire & Auto Center, in a new blog post.

That’s because both government and the auto industry have shifted development of driverless cars into high gear, she explains. Under new rules proposed by the U.S. government, for example, all new cars must be able to wirelessly “talk” to one another starting in 2020. “It’s a crucial first step in making our roadways friendlier to driverless cars and trucks,” Bigelow writes. “It will also make your driving experience safer, more convenient, and even more fun.”

Although many of us still find the notion of driverless cars and trucks rather astonishing, Bigelow and her fellow technicians at Advanced Tire & Auto Center (146 Hwy. 35 North in Aberdeen) have closely followed the trend from the beginning. Innovators such as Waymo (Google) have safely logged millions of miles on public roads in driverless cars, notes Bigelow.

In the blog (“Car Trends to Watch in 2017 and Beyond”), the 17-year veteran of the industry points to some of the advanced features intended to make autonomous vehicles vastly safer than human drivers.

“When camera- and sensor-equipped ‘connected cars’ talk to each other, they will be able to send messages along the lines of ‘swerve left to avoid a mattress on the highway,’ or ‘get ready to stop—there’s a blind curve up ahead and all the cars are at a standstill due to an accident,’” writes the Holmdel, N.J. native. “Your car in such scenarios will take control, reacting faster than you ever could. The technology could save your life.”

Connected cars will also make life easier in other ways as well, Bigelow predicts. In the years ahead, new cars will link to the likes of Amazon Echo with its virtual assistant Alexa. “Stuck in traffic, you’ll be able to say ‘Alexa, play my ‘Serenity Now’ music playlist,’ or ‘Alexa, put in our usual Amazon Fresh grocery order and have it delivered at 8 a.m. tomorrow,’” she writes.

Likewise, those with “wired” homes will be able to tell their cars to make a pot of coffee in the kitchen, open the garage door, turn off the burglar alarm or crank up the AC. Autonomous parking will also be an early feature of the coming wave of high-tech cars, Bigelow notes.

“It won’t be long before you’ll be able to drive to the front of a mall, hop out of your car and have it park itself,” she writes in the blog post. “Later, your car will pick you up like a dutiful chauffer.”