Founded in 2003, K1 Speed has grown to become the premier karting company worldwide. 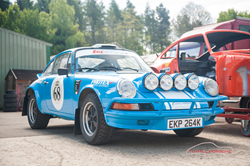 With 31 locations in the U.S. and more underway, a dozen of international franchises of which two are open in Mexico with a third opening next month in Monterrey and nine under construction in Mexico, Panama and Canada, K1 Speed brings the thrill and excitement of indoor karting to a large audience with expansion opportunities in Europe and Asia.

Team K1 Speed will be competing in a two-week endurance race bringing franchise awareness abroad. The Baltic Classic Rally, taking place on Sun. May 28th, starts in Copenhagen, Denmark and crosses the borders of Sweden, Finland, Estonia, Latvia, Lithuania, Poland ending on Sat. June 10th in Germany. All countries make a great fit for K1 Speed franchises due to the rally racing heritage. The rally-prepped air-cooled classic 1973 Porsche 911, built by the world’s leading Tuthill Porsche 911 rally workshop, will face some challenging driving conditions as well as journey through historic rally sections along the way.

Porsche legend, Björn Waldegård, drove this car and won the first Colin McRae Memorial Rally. The car has clocked up thousands of miles rallying since being built, including wins on the Costa Brava and Isle of Man historic events. Not to mention also taking part in both Morocco Historic and Safari Classic rallies as well as a few runs on Below Zero Ice Driving in Sweden.