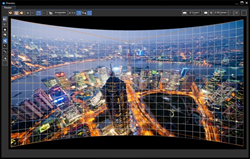 Covering a venue of five rooms consisting of large arenas, ballrooms, and general viewing areas, programmers and graphics/media coordinators were tasked with showcasing pre-rendered media, conference presentations and video from within the rooms and IMAG (image magnification) to the attending audiences. For example, one setup employed a creative canvas five screens wide that traditional solutions were unable to manage. The complexity of the variety of media coupled with mix-matched sizing required special attention to meet the demands of the client.

“We leverage the power of Pandoras Box to create animations in different ways that you can’t do in a traditional format,” said Cameron Yeary, visual media developer, Unlimited Visibility, Inc. “No other product on the market right now allows us to take those types of visual feeds and manage them with low latency. We also run Widget Designer in each room, which helps manage all of the visual feedback from the Pandoras system while critically observing and monitoring each screen process. It really makes the show look professional and well thought out, from the first pixel to the last pixel -- from the first case into the room to the last case out.”

“We worked on the scenic design content for months prior to the event. Scenic design plays a big role in the overall visual development process because it determines screen sizes,” said Walter Soyka, design lead, Drury Design Dynamics. “One of the things I really value about having a Pandoras Box on a project like this is that it has a couple of technical and creative ‘get out of jail free’ cards that I can keep in my back pocket. You can be creative in the venue and solve a problem with the content right there with your programmer without needing to take everything back to the media department for a lengthy re-render. To have that flexibility and the ability to solve technical and creative problems on the box in real time is really vital to me.”

For these particular conferences, none of the content, graphic elements or visual input was sized traditionally except for normal 16:9 slides. The fact that everything in the entire show had to be cropped or masked would have made a traditional show format very difficult.

“Because the Pandoras Box pixel-accurate workflow combined with the ability to preview all the content on laptops in preproduction, we had the ability to not only get ahead of the game, but achieve the client’s expectations of creating a mathematically precise presentation,” concluded Yeary.

Christie Pandoras Box, an award-winning family of hardware and software tools for real-time video processing and show control, provides fast processing power, exceptional memory and expanded storage for a high-performance hardware platform that can handle the most challenging show requirements.

Christie Digital Systems USA, Inc. is a global visual and audio technologies company and a wholly-owned subsidiary of Ushio Inc., Japan (JP:6925). Consistently setting the standards by being the first to market some of the world’s most advanced projectors, complete system displays, and cinema audio solutions; Christie is recognized as one of the most innovative visual technology companies in the world. From retail displays to Hollywood, mission critical command centers to classrooms and training simulators, Christie display solutions and projectors capture the attention of audiences around the world with dynamic and stunning images, accompanied by awe-inspiring sound. Visit http://www.christiedigital.com.