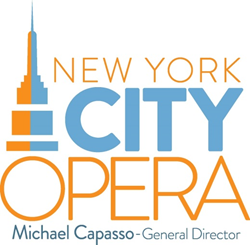 Soprano Anna Caterina Antonacci in Her Only U.S. Appearance of Season
February 20, 2018

May 24, 2017 – New York City Opera’s 2017/2018 season will offer four new mainstage productions at Jazz at Lincoln Center’s Rose Theater, including a Spanish-language opera as part of its Ópera en Español series. City Opera will also offer two New York City Opera Concerts in Zankel Hall at Carnegie Hall and a chamber opera series at locations to be announced. New York City Opera Orchestra will be featured in every opera.

The company once again opens New York’s cultural season with Opening Night on Wednesday, September 6, 2017 featuring a new production of Puccini’s LA FANCIULLA DEL WEST. The season continues in October 2017 with the first chamber opera of the season, the New York premiere of Tobias Picker’s DOLORES CLAIBORNE, based on the novel by Stephen King, in a new chamber adaptation by the composer.

The mainstage season concludes in June 2018 with the U.S. premiere of Charles Wuorinen’s BROKEBACK MOUNTAIN, the second installment in City Opera’s LGBT Pride Initiative which begins with performances of Peter Eötvös’s ANGELS IN AMERICA at the Rose Theater on June 10, 12, 14 and 16, 2017.

The New York City Opera Concerts series will move to Zankel Hall at Carnegie Hall with two one-night-only concerts. The first concert on November 9, 2017 will celebrate the 90th birthday of the renowned American composer Dominick Argento and will feature the New York City Opera Orchestra conducted by Gil Rose. On February 20, 2018 the Italian soprano Anna Caterina Antonacci, in her only U.S. appearance of the season, will take the stage with pianist Donald Sulzen.

New York City Opera is honored to announce the appointment of Tobias Picker as New York City Opera’s Composer-in-Residence. City Opera will present Picker’s new adaptation of his 2013 opera Dolores Claiborne as part of the chamber opera series in October 2017. Last year, City Opera announced that it had commissioned a new opera from Picker, AMERICAN VENUS, based on the life of Audrey Munson.

Michael Capasso, General Director, New York City Opera said, “As this pivotal season in New York City Opera's history draws to a close, I am thrilled to unveil our exciting plans for the future. Over the past months, the overwhelming response from our enthusiastic audiences, generous patrons, and the artistic community has confirmed City Opera's vital and enduring role in New York's thriving cultural scene. Continuing City Opera's long tradition of diverse and eclectic programming, our upcoming season features relevant and engaging contemporary works alongside rarities and beloved classics. I am also excited to welcome my friend and advisor Tobias Picker to the City Opera Family as Composer-in-Residence. In addition to contributing his own outstanding work, his council will be invaluable in general and in our programming of contemporary works in future seasons.”

Tobias Picker added, “New York City Opera has been at the forefront of engaging with opera as a living art form for nearly three quarters of a century.  I am delighted and honored to join my old friend Michael Capasso as he continues to breathe fresh life into our beloved hometown opera company. When City Opera gave the New York premiere of my first opera EMMELINE twenty years ago I felt humbled. Today, I feel privileged to help give life to important operas by my distinguished colleagues.”

Considered by Puccini himself to be among his finest works, the brilliant orchestration and lyricism of LA FANCIULLA DEL WEST animate the passion and adventure of the California Gold Rush. The opera had its world premiere at the Metropolitan Opera in 1910 and has long been a favorite of New York audiences. City Opera’s new production of Puccini’s LA FANCIULLA DEL WEST will be directed by Ivan Stefanutti and conducted by James Meena. The production is an international collaboration between the Teatro di Giglio in Lucca, Italy, the Teatro Lirico in Cagliari, Sardinia, and Opera Carolina.

City Opera’s new production of José “Pepe” Martinez’s CRUZAR LA CARA DE LA LUNA (To Cross the Face of the Moon) in January 2018 will mark the work’s New York premiere. With a libretto in Spanish and English by Leonard Foglia and the composer, CRUZAR LA CARA DE LA LUNA will be the third installment in City Opera’s Ópera en Español series. The world’s first mariachi opera, this timely story of an immigrant family divided by the U.S./Mexican border has earned raves from critics and audiences worldwide. Leonard Foglia will direct the production at Jazz at Lincoln Center’s Rose Theater.

Set in the Middle Ages, the Italianate melodrama of Italo Montemezzi’s 1913 masterwork is fueled by a lush score influenced by Wagner and Debussy. The opera was frequently performed at the Metropolitan Opera before World War II. In 1982, New York City Opera presented the first staged performances of the opera since 1949, starring American bass Samuel Ramey. City Opera’s new production of L'AMORE DEI TRE RE (The Love of Three Kings), conducted by Pacien Mazzagatti and directed by Paul Curran, will be the first time the opera has been heard in New York in over a decade.

After successful premieres in Europe, this intrinsically American work exploring conflict between love and identity finally debuts in the U.S. Inspired by the 2005 film directed by Ang Lee, American composer Charles Wuorinen approached Annie Proulx to adapt her story into the libretto for BROKEBACK MOUNTAIN. The work was originally commissioned by New York City Opera in 2008 but ultimately premiered at Madrid’s Teatro Real in 2014. This production, conducted by American conductor Kazem Abdullah, will be the opera’s U.S. premiere. Following City Opera’s production of the New York premiere of Eötvös’s ANGELS IN AMERICA in June 2017, BROKEBACK MOUNTAIN will be the second effort in the company’s initiative to celebrate LGBT Pride.

Hailed at its premiere by Opera News as “a significant new work... a triumph for all concerned,” the impact of Stephen King’s psychodrama is heightened in this intimate, new chamber adaptation of Tobias Picker’s opera. New York City Opera Principal Conductor Pacien Mazzagatti leads the production in October 2017.

The myth of Pygmalion, the artist who begs Venus to animate his sculpture of the ideal female form, inspired both Donizetti’s first opera and one of Rameau’s most revered masterworks. For the first time in New York, these one-act gems are brought together in the same program.

New York City Opera will celebrate the 90th Birthday of American composer Dominick Argento with a concert in Carnegie Hall’s Zankel Hall featuring the New York City Opera Orchestra conducted by Gil Rose on November 9, 2017. The composer of fourteen operas and numerous song cycles, choral pieces, and orchestral works, Argento has been one of America’s leading composers for over six decades. The concert offers two tour-de-force monodramas by Argento exploring the joys, failures, and obsessions of the human condition: MISS HAVISHAM'S WEDDING NIGHT, adapted from his 1977 opera MISS HAVISHAM'S FIRE, which was commissioned by New York City Opera, and A WATER BIRD TALK, adapted from Chekhov’s play ON THE HARMFULNESS OF TOBACCO and John James Audubon’s BIRDS OF AMERICA.

City Opera presents the great Italian soprano Anna Caterina Antonacci in her only U.S. appearance of the season in a recital with pianist Donald Sulzen at Carnegie Hall’s Zankel Hall on February 20, 2018. Ms. Antonacci is recognized as one of today’s leading singing actresses with a repertoire that includes some of opera’s most challenging roles including Cassandre in Berlioz’s LES TROYENS, Dulcinée in Massenet’s DON QUICHOTTE, and the title roles in Cherubini’s MEDEA, Glück’s ARMIDE and IPHIGÉNIE EN TAURIDE, and Bizet’s CARMEN.

Last spring, General Director Michael Capasso announced the beginning of City Opera’s Commissioning Initiative with the commission of Tobias Picker’s AMERICAN VENUS, based on the life of Audrey Munson, to celebrate City Opera’s 75th Anniversary in 2019.

Born in New York City, Tobias Picker is one of America’s most sought-after composers. In 1996, Santa Fe Opera commissioned him to write his first opera, EMMELINE, which was brought to New York City Opera for its New York premiere in 1998. His other operas include FANTASTIC MR. FOX, THÉRÈSE RAQUIN, AN AMERICAN TRAGEDY, which was commissioned by the Metropolitan Opera and had its world premiere with the company in 2005, and DOLORES CLAIBORNE, which premiered at San Francisco Opera in 2013. Mr. Picker is Artistic Director of Tulsa Opera.

AMERICAN VENUS is based on the fascinating life of Audrey Munson, the model for some of New York’s most iconic monuments, whose career flourished during the Gilded Age, but who died in obscurity.

"Audrey Munson was the first American supermodel.  Although she inspired the greatest monumental sculptors of her day, she died alone and forgotten. Hundreds of thousands of people pass by her watchful eye every day in New York City, and throughout the country, unaware of her tragic story. She is Columbia University's bronzed "Alma Mater,” “Pomona” of the Pulitzer Fountain at the Plaza Hotel, and the gold leafed "Columbia Triumphant” in Columbus Circle to name but a few of her many guises. I think of Pygmalion and Galatea as I embark upon this exciting journey to bring the images of Audrey Munson, our American Venus, full circle back to life. I am deeply honored that New York City Opera has given me this awe-inspiring opportunity."

BROKEBACK MOUNTAIN BY CHARLES WUORINEN
Jazz at Lincoln Center’s Rose Theater
May 31 and June 2, 3, and 4, 2018

Double-Bill: Rachmaninoff’s Aleko and Leoncavallo’s Pagliacci
“...NYCO is on the right track to re-establishing itself as a force in the opera world.”
– The Huffington Post, September 2016

“It was an inspired idea to pair Aleko and Pagliacci...”
– The New York Times, September 2016

Ottorino Respighi’s La Campana Sommersa
“...a sparkling production of the obscure Respighi opera La Campana Sommersa is more than just excellent in all its parts: it places NYCO squarely back where it belongs, in the front rank of New York’s operatic establishment.”
– The [New York] Observer, April 2017

“[La Campana Sommersa] turned out to be an exceptional piece of work, and its production by the New York City Opera (which runs at Jazz at Lincoln Center’s Rose Theater through April 5th) has proved to be the finest effort so far of the
recently reëstablished company.”
– The New Yorker, April 2017

“The production is part of a new initiative, 'Ópera en Español,' led by [Michael] Capasso, who is interpreting the company’s mandate as 'the people’s opera' in a new way, emphasizing outreach to the Hispanic community while inviting connoisseurs to sample an out-of-the-way treasure.”
– The New Yorker, May 2017

ABOUT NEW YORK CITY OPERA
Since its founding in 1943 by Mayor Fiorello La Guardia as “The People’s Opera” New York City Opera has been a critical part of the city’s cultural life. During its history, New York City Opera launched the careers of dozens of major artists and presented engaging productions of both mainstream and unusual operas alongside commissions and regional premieres. The result was a uniquely American opera company of international stature.

In 1999, New York City Opera founded VOX, Contemporary Opera Lab, an annual concert series that offered composers and librettists the opportunity to hear excerpts of their works performed by professional singers and musicians. For decades New York City Opera has been committed to introducing opera to the young, bringing the art form to new audiences with educational outreach performances in New York City’s public schools.

Now, having returned to the stage, New York City Opera continues its legacy at a new, state-of-the-art home at Jazz at Lincoln Center’s Rose Theater with revitalized outreach and education programs, and programming designed to welcome and inspire a new generation of City Opera audiences.

The company concludes its 2016 – 2017 season with the long-awaited New York premiere of Péter Eötvös's Angels in America, based on the Pulitzer Prize-winning play by Tony Kushner in June 2017.