Author Walter Hubbard’s Newly Released “Cactus Jack: Against All Odds” Tells the Story of a Man Whose Strength and Commitment Changed the Lives of Countless.

“Cactus Jack: Against All Odds” from Christian Faith Publishing author Walter Hubbard is the story of all those affected by Coach Cactus Jack. Through his strength and commitment in the face of crippling adversity, he changed countless lives. 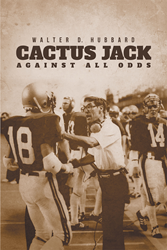 “Cactus Jack: Against All Odds”: the story of Coach Cactus Jack and the impact he has had on so many others. “Cactus Jack: Against All Odds” is the creation of published author, Walter Hubbard, a retired wildlife and fisheries biologist and pharmacy technician. Walter D. Hubbard is married to Jack Carlisle’s third child Jane. Walter. Walter and Jane have three adult children and a granddaughter. Walter and Jane currently live in New Albany, MS with Jack and his wife Jean in the house next door.

“Stories and testimonials illustrate how players took their sweat equity with them long after old-school football. Although his teams frequently felt the thrill of victory, Jack’s career was more about young people experiencing the true meaning of commitment.” --Walter Hubbard

What sets Jack Mason Carlisle’s story apart is the impact he had on the lives of others, because he overcame the adversity he faced. If he had something to prove, it is, because he did. After a boyhood accident resulted in the amputation of his leg, the odds were stacked heavily against him to ever fulfill his dream of becoming a coach. The story is not a distinguished sixty-one-year career or a Mississippi high school football record of 262–70–17, it is the number of hearts changed along the way.

Coach Carlisle was old school. He was tough. Players often did not make his team without first adopting a bit of his personality and a large portion of his commitment. He believed young people do only what they are forced to do and everybody can do more than they can imagine. When it came down to a player making his team, talent played second fiddle to just wanting it more than the next guy.

View a synopsis of “Cactus Jack: Against All Odds” on YouTube.

Consumers can purchase“Cactus Jack: Against All Odds” at traditional brick & mortar bookstores, or online at Amazon.com, Apple iTunes store, Kobo or Barnes and Noble.

For additional information or inquiries about “Cactus Jack: Against All Odds”, contact the Christian Faith Publishing media department at 866-554-0919.