Author Penelope Colt’s Illustrated the Newly Released “Just What Happened in the Garden of Eden” is a Trio of Biblical Renditions Featuring Adam, Abraham, and Jesus 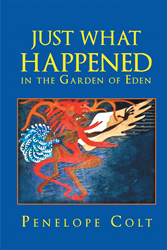 “Just What Happened in the Garden of Eden”: retells the stories of three Bible figures in modern terms. “Just What Happened in the Garden of Eden” is the creation of published author, Penelope Colt, mother, trader, horse farmer, artist and a former GM journeyman. Born in 1953 in Portland, Oregon, her family moved to NYC when she was three. At six, they moved to Dayton, Ohio, where Penny graduated high school. At sixteen, she toured France to learn the language. She studied outdoor education at Goddard College in Vermont and philosophy at Boston University where she was deeply involved in de-segregation and race relations.

Taking an internship at Tahlequah, Oklahoma, she was exposed to the Native American heritage. In 1976, she was hired by GM in Michigan as a tool and die apprentice, earning her journeyman card eight years later. She married a horse logger. After the birth of her second child in 1986, Penny quit GM and her family traveled throughout the US buying and selling at major flea markets and festivals. In 1993, they bought a hundred acres in Tennessee where they built a log cabin and lived off the land. She has since divorced, but maintains her farm and sells artwork.

“’ADAM…ADAM.’ Sound filled the air. It was all around. He did not know from where it came. ‘ADAM… ADAM.’ Sinking quickly and suddenly under the fern again, he lay as still as his shivering body would allow. Over and over, he heard that sound…’ADAM…ADAM.’ And he began to cry.” -- Penelope Colt

Published by Christian Faith Publishing, Penelope Colt ’s new book is a trio of stories about key figures featured in the Bible, illustrated by author.

“Just what happened in the Garden of Eden” offers a short rendition of the Biblical account detailing the creation of mankind. Easy to read for young and old alike, this rendition reveals why Adam hid from God after his Sin, even though Adam understood that God already knew what he had done.

“Abraham, our Father of Faith” interprets the Biblical account of Abraham’s life in modern language while remaining true to Scripture. Abraham believed everything God told him and lived his life according to God’s wishes. His story is a powerful account of how well people can live, if they simply walk in way of the Spirit. Because Abraham was found faithful, mankind has the Savior, Jesus Christ.

“On the Road to Emmaus” captures the fear expressed by the Disciples after Jesus was crucified. It is written as an interview of Cleopas by Luke, the Apostle. Cleopas was one of the two disciples who met Jesus on the road to Emmaus. Taking the four Gospels and combining them into a single timeline, the author explains the resurrection in modern terms.

View a synopsis of “Just What Happened in the Garden of Eden” on YouTube.

Consumers can purchase “Just What Happened in the Garden of Eden” at traditional brick & mortar bookstores, or online at Amazon.com, Apple iTunes store, Kobo or Barnes and Noble.

For additional information or inquiries about “Just What Happened in the Garden of Eden”, contact the Christian Faith Publishing media department at 866-554-0919.